Public gets first look at designs of 19 rapid transit stations

Or red and beige.

When light rail transit is up and running in Waterloo Region in 2017, it won’t just be the names of the stops that make them unique.

“It’s beyond just a stop name – it’s something that is visually prominent for the users of our system,” said Danielle Bury, a transportation planner with the Region of Waterloo.

The proposed stop designs, made public Tuesday, all featured the anchor walls.

All are the same shape and size, and all feature a glass panel closer to ground level – but each station will be coloured differently.

“What we’ve really tried to do … is make sure that all 19 stops are unique to their neighbourhood,” Bury said.

At King and Frederick streets in downtown Kitchener, that means frosted glass – to tie the station in with nearby buildings like Market Square and the Waterloo Region Courthouse.

Eramosa stone will give the wall at the Waterloo Park stop a natural look, documents prepared by the region say, while the station on Allen Street will feature red and beige streaks to represent nearby housing developments.

“We want them to be fairly big and bold, but we also want them to represent the area that they’re going to be located in,” said Coun. Tom Galloway.

All anchor walls will be given a graffiti-resistant finish, Bury said – and any costs for repairing graffiti will be borne by the GrandLinq consortium and not directly by the region.

The full platforms will be mainly glassed-in and about 65 metres long, with about half of that span under a canopy.

Bus rapid transit stops in Cambridge will have similar anchor walls, although all walls in that city will be given the same limestone finish.

Regional officials are seeking feedback on the planned stop designs.

Public consultations are being held May 20 at Knox Presbyterian Church in Waterloo and May 21 at the region’s administrative building on Frederick Street.

Comments can also be left on the region’s website. 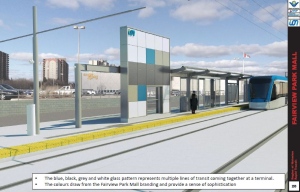