'Our customers are speaking with their wallets': Sales spike at Cambridge gun store following handgun freeze

Handgun sales have shot up in the days following the federal government’s announcement that it will freeze the sale and import of handguns in Canada.

The proposed legislation has some in Waterloo region moving quickly to buy handguns before it’s too late.

“It’s one of the biggest booms in sales that we have seen,” said Ryan Simper, sales and marketing at Select Shooting Supplies in Cambridge.

The rush comes after Prime Minister Justin Trudeau’s announcement Monday, tabling legislation that would put a national freeze on handgun ownership in an effort to curb gun violence. 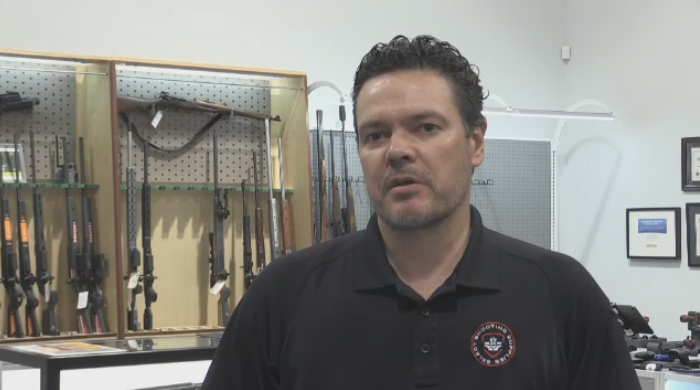 Ryan Simper at Select Shooting Supplies in Cambridge appears during an interview with CTV News on June 1, 2022. (Stephanie Villella/CTV News)

“What this means, is that it will no longer be possible to buy, sell, transfer, or import handguns anywhere in Canada,” Trudeau said at a press conference Monday.

Those in the gun community said the proposed legislation is only penalizing law-abiding gun owners.

Simper said in Canada, a person can only purchase a legal gun if they are licensed and have completed vigorous training and safety courses. They must also be vetted and cleared by the Royal Canadian Mounted Police to own a gun.

The Coalition for Gun Control calls the new legislation a “game changer,” and says regulating firearms is important to reduce the risk that dangerous people will get access to guns.

“If you look at mass shootings, whether we’re talking about the Quebec Islamic Centre or horrific cases of domestic violence that we’ve seen, most of those shootings are legal guns, legal gun owners,” said Wendy Cukier, president of the Coalition for Gun Control.

Cukier said while most gang-related shootings are with illegally obtained guns, about a quarter of them are with legal guns that were stolen.

“The better we restrict access to firearms, especially handguns and military style assault weapons, the more we reduce the risk that those guns will be used to kill,” Cukier said.