Ontario COVID-19 database accessed a combined 5,000 times by police in Guelph and Waterloo

A file image of a Waterloo Regional Police car.

The database, which was shut down following a legal challenge by a group of human rights organizations, gave police access to thpublic health records of people who had tested positive for COVID-19.

Waterloo regional police accessed the database 1,180 times between April 17 and July 20, according to the CCLA. The Guelph Police Service accessed it 4,057 times, and Brantford police used it 2,089 in that timeframe. 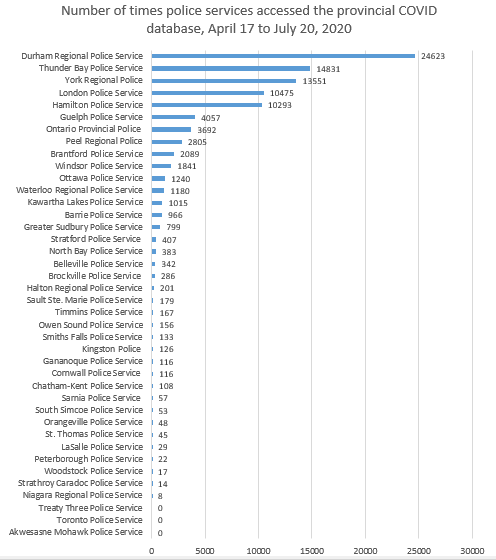 The data was released in the context of legal action. Police forces across Ontario conducted more than 95,000 searches while it was accessible.

The Durham Region Police Service accessed the information the most, using the database 24,623 times. Thunder Bay police accessed it 14,831 times.

The London Police Service accessed the data 10,475 times, prompting a call for a public audit.

The provincial government passed an emergency order in April that allowed police to obtain the names, addresses and birth dates of Ontario residents who had tested positive for COVID-19.

With files from The Canadian Press and CTVNewsLondon.ca