KITCHENER -- Region of Waterloo Public Health officials reported no new cases of COVID-19 for the first time in more than four months on Tuesday, a sign that the region could be through the first wave of the virus.

There have been a handful of days on which officials have only reported one new case, but the last time the case total didn't move was on March 15, the region's COVID-19 dashboard shows. 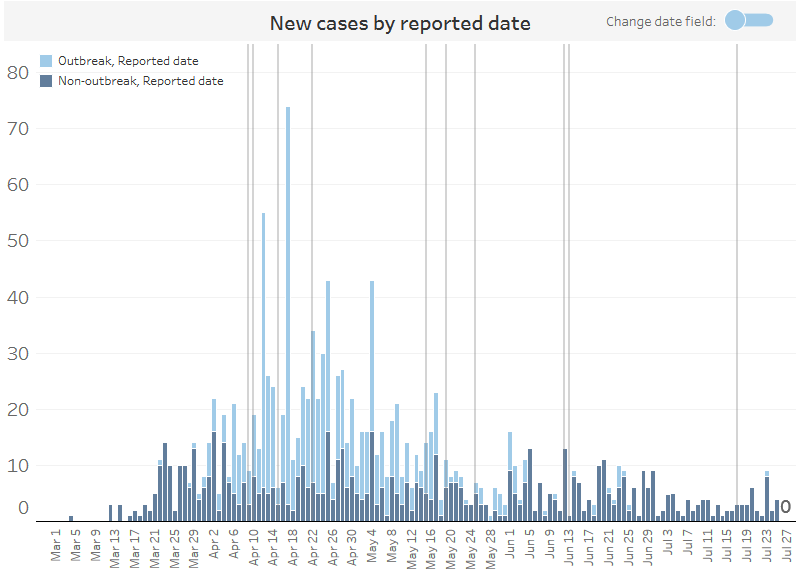 The number of COVID-19 cases in Waterloo Region by reported date. On July 28, officials reported no cases for the first time since March 15. (Source: Region of Waterloo)

With one new resolved case reported on Tuesday, there are now 41 known active cases in the region.

While two days in a row with no new cases is an encouraging sign, Dr. Wang said we shouldn't expect it to stay that way.

Since Friday, the last day the region updated its testing numbers, there have been 2,599 new tests done, or about 650 per day.

According to the dashboard, 13 people remain in hospital with the virus. To date, 247 people have been hospitalized at some point.

The region's dashboard shows one active outbreak in the region, at Columbia Forest LTC. The outbreak was declared there on July 23, after a staff member tested positive.

A new feature on the region's website shows cases by age and reported date. That graph shows that new cases in people aged 20 to 29 are on the rise, while cases in most other age groups appear to be relatively flat.

People in that age range make up 40 per cent of COVID-19 cases reported since May 25, Dr. Wang said during a media briefing on Tuesday.

The number of COVID-19 cases in Waterloo Region by age and reported date. The age group of those 20-29 appears to be rising. (Source: Region of Waterloo)

She reminded the public that a social bubble, which can include up to 10 people, is a fixed number of people, not one that fluctuates based on the day.

She encouraged people to maintain physical distancing with those outside of their bubble.

Across the province, there were 111 new infections reported on Tuesday. Of those, 47 were reported in Ottawa and in Windsor-Essex.

That's compared to Toronto, which is still in Stage 2 of the province's reopening plan, where officials only reported six new cases.

Most public health units—27 out of 34—reported five or fewer cases of the virus.

Over the past 10 days, Ontario has seen daily case increases of between 103 and 203 cases.