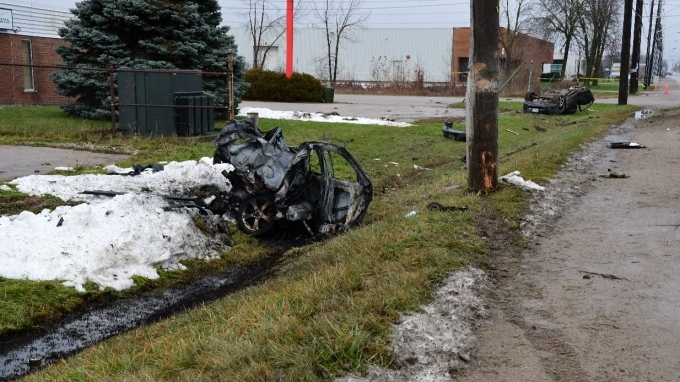 The SIU says the vehicle was going about 130 km/h when it lost control and collided with a utility pole. (Source: Special Investigations Unit)

KITCHENER – The Special Investigations Unit has found no basis to lay charges against a police officer involved in a pursuit that ended in a crash.

It happened in late November of last year, when a vehicle slammed into a utility pole in Guelph.

A 29-year-old man was seriously injured in the crash.

The SIU report says that an officer was responding to reports of a disturbance near Bagot Street.

A vehicle of interest was seen leaving, and an officer began following.

According to the report, the driver in the other vehicle lost control of his vehicle while driving at around 130 km/h on Silvercreek Parkway. The road was reportedly wet from moderate rainfall.

The vehicle was destroyed, in two distinct pieces.

The driver was taken to hospital and diagnosed with "a traumatic brain injury and multiple fractures."

After its investigation, the SIU has decided that there is no basis on which to lay charges against the responding officer.

To read the full report, visit the SIU's website.