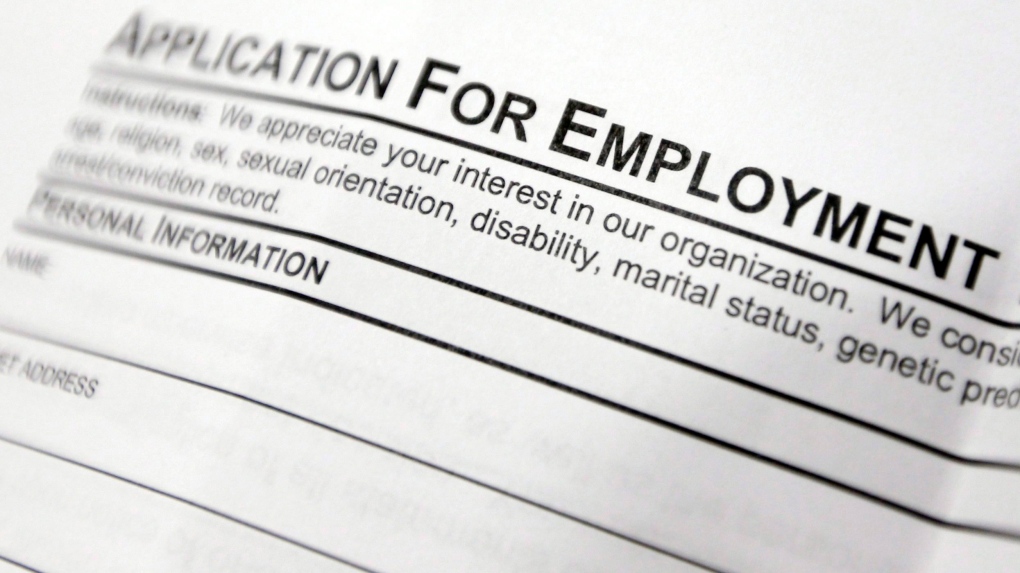 This April 22, 2014, file photo shows an employment application form on a table at a job fair in Hudson, N.Y. (AP Photo/Mike Groll)

The March results fuelled an already upward trajectory in employment and provided yet another piece of evidence that the economy has been building momentum for months.

However, while the report was largely welcomed by analysts as a positive signal, some of its finer details pointed to areas of softness.

The country's unemployment rate crept up last month to 6.7 per cent from 6.6 per cent, primarily because more people were looking for work, the agency said.

The report also found that 95 per cent of the new positions -- or 18,400 jobs -- were created in the more precarious category of self-employment, which can include people working for a family business without pay.

Most local unemployment rates also rose, with Waterloo Region seeing the smallest increase – from 5.5 per cent to 5.6 per cent, its highest mark since last fall.

Unemployment jumped from 4.2 per cent to 4.7 percent in Brantford – still lower than it was at any point during 2016 – and from 6.3 per cent to 6.8 per cent in the Stratford-Bruce-Peninsula economic region.

It was a different story in Guelph, where unemployment ticked down from a two-year-plus high of 5.8 per cent to 5.7 per cent.

The fresh data also showed a continued weakness in the key area of wage growth. On average, Canadian earners saw their pay increase 1.1 per cent over the last year -- a period during which consumer prices climbed by about two per cent.

The survey results arrived as Bank of Canada governor Stephen Poloz prepares to make a scheduled announcement next week on the trendsetting interest rate. Poloz is widely expected to keep the rate at 0.5 per cent on Wednesday.

BMO chief economist Doug Porter said while the new data is "generally positive," he believes it contains enough weaker elements for Poloz to flag that enable him to show the country has yet to return to full health.

"There are definitely some quibbles about this report," said Porter, who noted the sluggish wage growth.

"But I would say that the positives definitely outweigh the negatives -- we've now had solid job gains in seven out of the last eight months."

Economists had expected job gains of 5,000 last month and the unemployment rate to increase to 6.7 per cent, according to Thomson Reuters.

Last month's overall employment increase, which included 18,400 full-time positions or 95 per cent of all the new jobs, suggests the country's upward trend continued for a fourth consecutive month. But the gains in February and March were low enough that the agency deems them statistically insignificant.

Compared with a year earlier, the categories of full-time and part-time work have each increased 1.5 per cent.

The country lost 2,400 positions in the services sector last month, but added 21,800 factory jobs thanks to the biggest month-to-month surge in manufacturing work since 2002.

The manufacturing sector added 24,400 positions -- mostly in Ontario and to a lesser degree in Alberta -- to climb back up to the same level it was 12 months earlier.

Still, compared with its peak in the early 2000s, the manufacturing sector has about 630,000 fewer jobs, a drop of 27 per cent, Statistics Canada said.

The number of private-sector jobs rose 13,700 between February and March, while public-sector positions dropped by 12,700.

Experts also highlighted another positive sign in the March jobs report: a healthy increase in the number of hours worked.

Stefane Marion of the National Bank of Canada said the number of hours worked surged 1.1 per cent for their biggest month-over-month increase since 2009.

Marion wrote in a research note to clients Friday that he believes there's mounting pressure on Poloz to acknowledge the economy is performing better than expected, perhaps even as soon as next week.

He pointed to the tightening labour market, higher-than-anticipated growth and soaring housing prices.