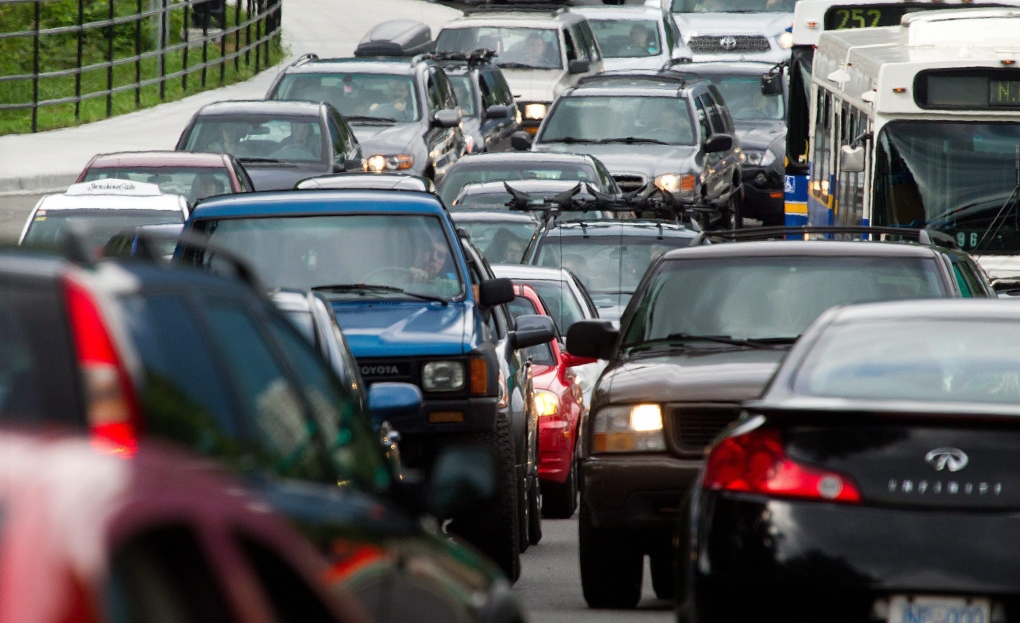 Traffic is shown in a file photo captured in Vancouver on Friday, July 15, 2011. (Darryl Dyck / THE CANADIAN PRESS)

KITCHENER -- If you drove in Waterloo Region last year, you spent enough time stuck in traffic that you could have knitted 17 hats and three sweaters.

That's according to the newly-released TomTom Traffic Index, which studied traffic congestion data from more than 400 cities around the globe.

The worst city for traffic was Vancouver, which saw congestion more than three times as often as Kitchener-Waterloo.

In KW, drivers spent 69 extra hours driving in rush hours over the course of the year, thanks to congestion seen about 16 per cent of the time. That was bad enough to land it at 12th-worst in Canada.

An infographic on the company's website compares that to watching 61 episodes of 'Game of Thrones,' or planting 69 trees.

In rush hour, a 30-minute trip took about eight minutes longer in the morning in Kitchener-Waterloo last year.

A half-hour rush hour trip in the evening, though, cost drivers about 10 extra minutes.

The absolute worst time for travelling in Kitchener-Waterloo, the report shows, is Wednesday between 5 p.m. and 6 p.m., where drivers see a whopping 37 per cent congestion rate.

Avoiding the roads at that time would save you about five hours per year, the index says.

While these numbers may seem bleak, the region's position on a global scale is actually pretty good: out of the 416 cities studied, Kitchener-Waterloo ranked at 364.

By comparison, the worst-ranked city in the world, Bengaluru, India, is congested a whopping 71 per cent of the time. There, drivers waste about 243 hours per year stuck in traffic, the index shows.

The city with the least congestion? That would be Greensboro-High Point, N.C. Drivers there see congestion just nine per cent of the time, accounting for 34 hours of lost time in rush hour per year.