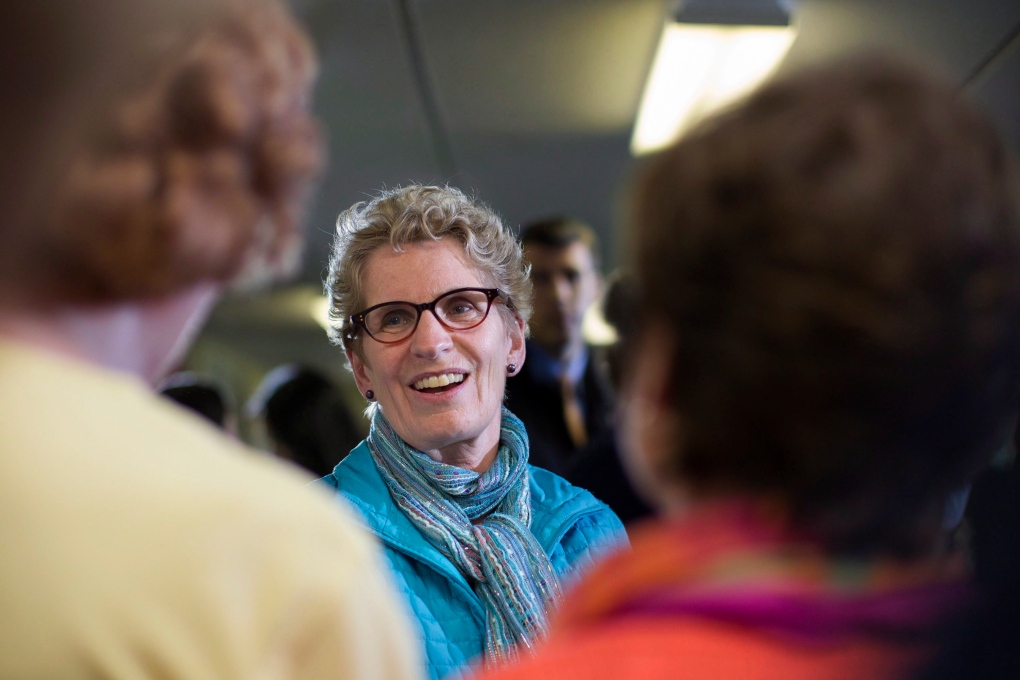 Ontario Premier Kathleen Wynne talks to members of Toronto's Leaside Lawn Bowling Club after adressing the media as she begins her campaign in Ontario's provincial election on Saturday May 3, 2014. THE CANADIAN PRESS/Chris Young

TORONTO -- Voting New Democrat could result in a coalition government led by the Progressive Conservatives, Premier Kathleen Wynn said on Saturday, even though the Tories have shot down the concept of teaming up with another party.

Wynne accused NDP Leader Andrea Horwath of betraying her party's long-standing commitment to social justice by refusing to rule out propping up Tim Hudak's Conservatives if a minority government results after June 12.

Wynne also contrasted the priorities of New Democrat icons with Hudak's plan to slash spending and cut 100,000 public-sector jobs to balance the budget.

"It is shocking that the party of Jack Layton and Stephen Lewis -- the party that has traditionally supported social programs, the party that should have supported our budget -- would be thinking about supporting Tim Hudak," Wynne said at a rally.

"Andrea Horwath's NDP is a party that used to have principles. It used to stand for something."

Horwath has taken an "unprincipled stance" by not ruling out supporting the Tories in a minority government, Wynne said.

So far, Horwath has only said she'll deal with the election outcome after the votes are in. In recent days, she has stepped up her attacks on Wynne by calling the Liberals "rife with corruption."

Hudak has rejected out of hand the notion of joining any party to form a government if his Progressive Conservatives win the most seats on June 12 but fall short of a majority.

Wynne herself has refused to exclude joining forces with the NDP, which triggered the election by opposing the Liberals' spend-heavy budget, if the Tories don't win a majority.

In the 2011 election, Hudak attacked the notion of a coalition government between the Liberals and NDP, and in the final days of the campaign, former premier Dalton McGuinty said he wouldn't enter into a pact with an opposition party.

In 1985, the provincial Liberals and NDP teamed up to replace the newly elected minority Tory government under then-leader Frank Miller.

The New Democrats agreed to prop them up on condition the Liberals implemented some of their policies. Two years later, the Liberals won by a landslide and the NDP lost seats.