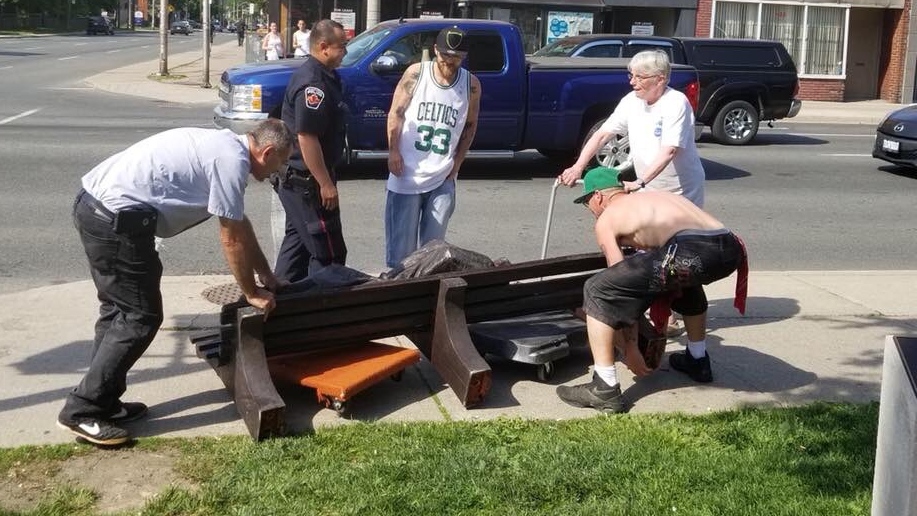 Two men try to pick up a bench containing a 'Homeless Jesus' statue after it was knocked down by an out-of-control truck. (St. Patrick's Parish / Twitter)

A statue of Jesus Christ was the only thing standing between an out-of-control truck and a potentially serious collision, police say.

Monday afternoon, a junk removal truck was driving through Hamilton when it allegedly failed to stop for a red light.

According to Hamilton police, the driver was unable to stop the truck and intentionally drove it off the road to avoid causing a collision.

Once off the road, the vehicle hit a bench with a statue on it and came to a stop. Had the truck not hit the bench, police say, its path would have taken it onto busy King Street, where it likely would have hit pedestrians or other vehicles.

You know you're having a bad day when you crash your truck into the Homeless Jesus Statue pic.twitter.com/pAu4xWId82

The statue is a ‘Homeless Jesus’ sculpture designed by Timothy Schmalz of St. Jacobs. It depicts a life-sized Jesus asleep on a bench under a blanket. The design was inspired by an encounter Schmalz had with a man experiencing homelessness in Toronto.

Schmalz’s first attempts to get churches to install the bronze sculptures were met with rejection. That changed after his 2013 trip to Vatican City, where one of the pieces was blessed by Pope Francis. Since then, churches in locations ranging from South Africa to Israel to Spain have accepted versions of the sculpture.

In 2016, the same Hamilton statue attracted attention when several people called 911 about it during a cold snap, believing it to be an actual homeless person trying to sleep on the bench.