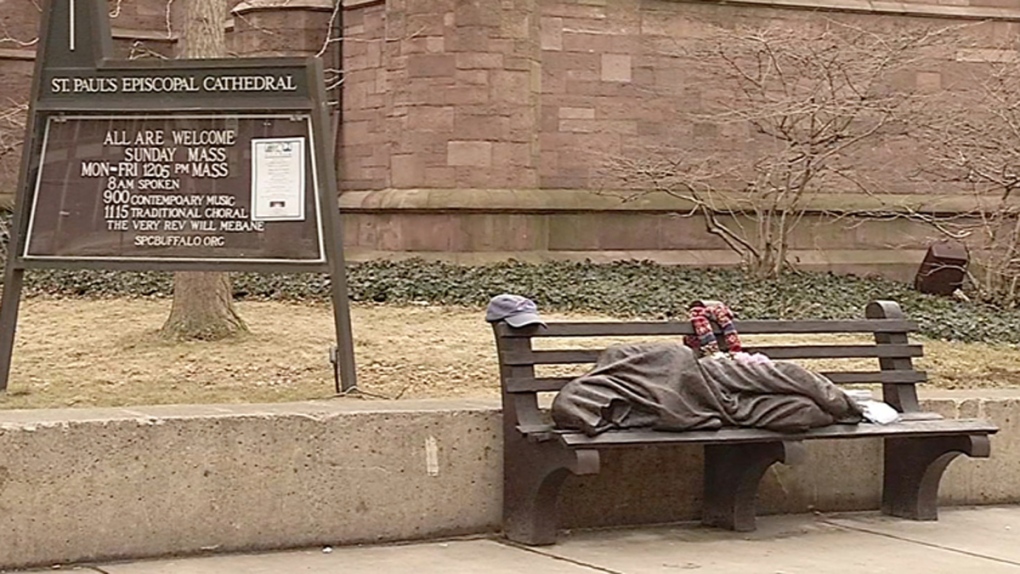 A work by Canadian sculptor Timothy Schmalz, a blanket-shrouded Jesus identifiable only by the crucifixion wounds on his feet, outside St. Paul's Episcopal Cathedral in Buffalo, NY., April 3, 2015. (AP / Courtesy of WIVB-TV)

HAMILTON -- A statue in the southern Ontario city of Hamilton is getting a lot of attention from paramedics as a recent blast of wintry weather has resulted in calls about a homeless person sleeping on a bench.

Hamilton Paramedic Service operations supervisor Edward Harris says they've responded to several emergency calls after officials issued a plea for citizens to alert the authorities when they see people out in the cold.

Harris says paramedics are hearing from concerned citizens who have mistaken "Homeless Jesus," a bronze sculpture of Jesus wrapped in a blanket and sleeping on a park bench, for a real person.

All emergency calls are taken seriously, Harris adds, and so crews have been sent to the location outside a church, which is located in an area of Hamilton with a high homeless population.

The sculpture was created by St. Jacobs-based artist Timothy Schmalz, and copies are in place in cities including Grand Haven, Mich., Phoenix, Washington, Chicago, and Dublin, Ireland.

The Hamilton Paramedic Service on Wednesday tweeted "Thanks to those who reported someone (lying) out in the cold, thankfully it's the 'Homeless Jesus' statue."

"It is heartwarming to see the public's concern for the well-being of those in need," Harris said in an email.

"We put out the tweet to educate the public on the statue, its location and to provide additional information on local shelter services."