'I just want it to end': Dental hygienist who lost licence for treating his wife speaks out

KITCHENER - A former Guelph dental hygienist who lost his licence after treating his wife is fighting for change.

Alexandru Tanase lost his licence on Sept. 9 after a years-long case into his conduct following a complaint to the College of Dental Hygienists of Ontario. He's also been labelled as a sexual abuser by the college.

"There's a part of me that feels responsible," the man's wife Sandi Mullins tells CTV through tears.

Tanase says it's like a bad dream that he can't wake up from.

"I just want it to end," he says. "I don't want anybody to experience this."

Tanase argues that if he was a dentist and had done the same thing, or if he had been practicing in another province, there would have been no consequences.

He says that dentists in Ontario and dental hygienists in every province but Ontario and New Brunswick are exempt from this rule.

"In April 2015, the College of Dental Hygienists of Ontario (CDHO) proposed an amendment to the Regulated Health Professionals Act that, once approved by the provincial government, would allow dental hygienists to provide dental care to their spouse," Tanase explains in a Facebook post.

The College of Registered Dental Hygienists of Alberta is one that exempts spouses from being automatically considered cases of sexual abuse.

In its guidelines for professional boundaries, it says that "a spouse, interdependent partner or individual with whom a dental hygienist has a pre-existing sexual relation that is ongoing is NOT considered a 'client' for the purposes of sexual abuse and sexual misconduct."

Now, Tanase is calling on the Ontario government to approve the proposal before another dental hygienist faces the same fate.

Tanase admits where he went wrong.

He says he should have double-checked information from a colleague that the proposed law change had happened when, in fact, it hadn't.

He admits he cleaned his wife's teeth several times over the course of a year, from April 2015 until August 2016.

That's when a complaint was made after another hygienist reportedly saw a Facebook post from Mullins of her posing with her husband. 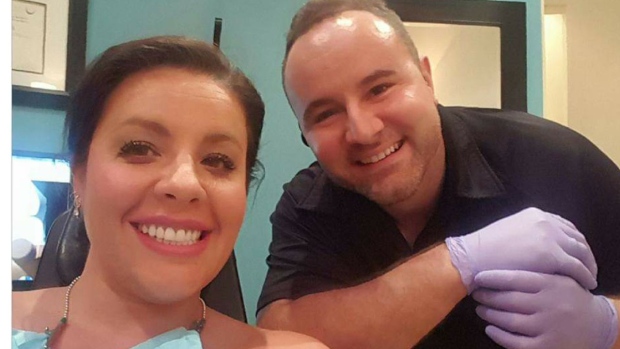 Tanase and Mullins say this photo was what prompted the complaint that would cost Tanase his licence. (Source: Sandi Mullins)

Tanase says that the law isn't designed for situations like his.

"There's no common sense in this situation, my situation in particular," he says.

"Because I know what happened and I admitted to it and I'm not hiding anything."

'I'm not a victim. The only thing I'm a victim of is this stupid law'

According to documents from a Superior Court appeal hearing—Tanase challenged the ruling under the Charter of Rights and Freedoms—the rule is "designed to protect patients."

Tanase says his wife doesn't feel protected at all.

"She is devastated and she is infuriated because nobody asked her as a victim, a supposed victim, how she's feeling or what does she have to say about this," he explains.

Mullins says the topic of sexual abuse is a sore one because she's had friends that have been sexually abused.

"To have that label placed on him when it's the furthest thing from the truth," she says.

"I mean, personally I find it insulting. Not just to him but to me, because sexual abuse indicates that there's a victim and I'm not a victim. The only thing I'm a victim of is this stupid law."

But the CEO of the College of Dental Hygienists, Lisa Taylor, says that, even if the law had been approved, as he had believed, Tanase would have faced the same consequences.

"If you check the dates that Mr. Tanase treated his now wife, you will note that this treatment occurred before they met the definition of a spouse," she explains.

The couple got engaged in April of 2015, the same month of the first treatment.

Still, the Superior Court agreed that the consequences are "harsh for a person in (Tanase's) circumstances."

"We also recognize that it seems unfair that dentists may treat their spouses while dental hygienists lose their licence and are branded sexual abusers for so doing," the decision reads.

It's the point about being labelled as a sexual abuser that really hits home for Tanase.

"As a person, not even as a dental hygienist—as a person to be accused of sexual abuse, it's not fair," he says, choking up.

"Because there was no sexual abuse. And yes, the court and the college recognize that, but I'm still treated and charged with this."

Tanase lost his licence to practice as a dental hygienist.

He's been banned from the College of Dental Hygienists of Ontario for five years.

He's not allowed to work in any setting where his knowledge of dental hygiene may help him.

He's been labelled a sexual abuser.

He says he now has trouble sleeping, and has faced financial hardships as a result of legal fees, fines and loss of work.

"It is extremely unfortunate when someone does (break the rule) and the result is a referral to discipline, because really, the college does not have any choice in terms of the penalty that it assigns," explains Margaret Carter, executive director of the ODHA.

According to the ODHA, Tanase is the fifth dental hygienist to be stripped of their licence for treating a spouse since 2005.

"So now my husband is a sexual abuser because he cleaned my teeth," Mullins says incredulously.

But both the ODHA and the Superior Court agree that this outcome is on the shoulders of the Ontario government for not passing the law sooner.

"It sincerely distresses us that dental hygienists are having their certificate of registration revoked and we have been working very diligently to try to get the regulation passed that would enable dental hygienists to treat their spouses," explains Carter.

She says that the previous provincial government is largely responsible for the inaction on the bill.

"The ministry is aware that the College of Dental Hygienists of Ontario has submitted a proposed regulation which would allow its members to treat their spouses," a spokesperson for the Ministry of Health says.

"Each regulation submission is subject to prior review by the Minister of Health and approval of the Lieutenant Governor in Council.  The proposal is currently under review and will be brought forward for the Minister’s consideration at the earliest available opportunity."

Tanase has begun an online petition that has reached more than 4,700 signatures in order to get the attention of the provincial government.

"I'm hoping for a little miracle," he says. "I'm hoping that the government sees my video, hears about my situation and approves (the law). And it will all go away."

He's also started an online fundraiser to help pay for legal fees after he says his professional insurance ran out. Tanase says he's been off work for almost three weeks since the Superior Court's most recent decision.