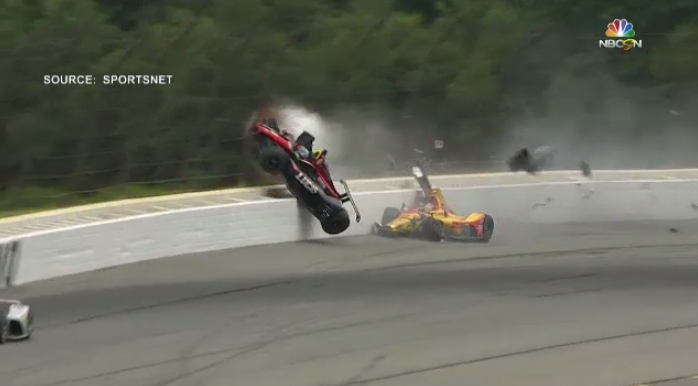 Robert Wickens speaks for the first time since crashing in an IndyCar race last August.

Robert Wickens will get a chance to drive on a racetrack again this weekend in the parade lap at the Honda Indy in Toronto.

The 30-year-old driver from Guelph announced the news Monday in a video on his Twitter feed.

Wickens has posted periodic updates on his recovery following a horrific August crash during an IndyCar race at Pocono. He suffered a thoracic spinal fracture, spinal cord injury, neck fracture, tibia and fibula fractures to both legs, fractures in both hands, a fractured right forearm, fractured elbow, four fractured ribs and a pulmonary contusion.

Wickens says he'll drive an Acura NSX with hand controls provided by Arrow, and he says he plans on going fast.

"I get to basically be pole position for the race, which is a blast," Wickens said. "I can't wait to get a helmet on and go around in an amazing car."

Wickens, who is undergoing an intense rehabilitation program in Colorado as he attempts to recover from his serious spinal cord injury, has maintained he wants to race again, and driving a car with hand controls could be a big step toward that goal.

Wickens has said he eventually wants to come back at the same level he was at before his accident, which ended a promising rookie season for the IndyCar newcomer.

I’M GETTING BACK IN A CAR! I’ll be doing the parade lap for the @hondaindy! This is just amazing and couldn’t happen without the help of @arrowelectronics installing the hand controls and @HondaRacing_HPD trusting me with such an awesome car! #IndyTO #ArrowDriven #SCIrecovery pic.twitter.com/mmaTIlrxCW