From an artist's view: Why controversial historical statues can be lessons worth leaving

KITCHENER -- Historical leaders are often immortalized as monuments, but their checkered pasts have sparked a lot of recent debate.

Sculptor Timothy Schmalz says he's had many thoughts about the destruction of sculptures in this region and around the world.

Schmalz is a figurative artist based out of St. Jacob’s. His pieces are installed worldwide.

Some of his most reputed work is on display in historical churches in Rome, at the Vatican and the Homeless Jesus.

Schmalz says he has been obsessed in the last couple of weeks about untying a knot, to figure out how we can give dignity to people's concerns.

“We can’t throw everything out,” Schmalz says. “We need to respect our past and our history. I think by being creative, by being positive, we can make everyone happy.”

That’s where the idea of the Monument of Oppression came from.

THE MONUMENT OF OPPRESSION

The Monument of Oppression is among Schmalz’s recent works.

He describes it as a supplemental monument, an additional piece of work, to be added to current monuments. 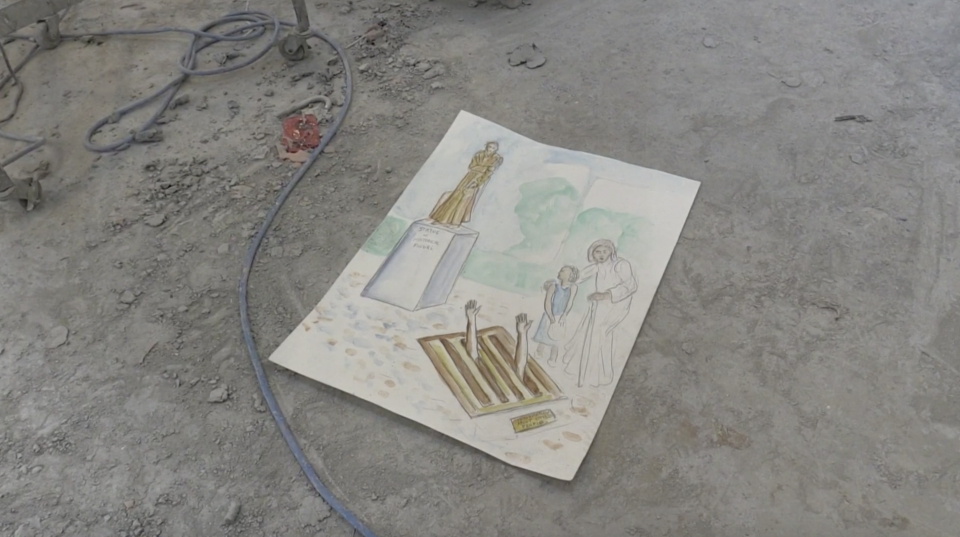 “What I thought about is, if you have a historical figure that did some horrific things in previous centuries, by just erasing that sculpture, in a sense you’re erasing that history,” says Schmalz.

“It’s not beneficial for anyone. It’s not marking anything. In a sense, it’s using the sculpture as a scape goat to condemn a whole culture and a whole history that we can’t really understand right now, because we weren’t there,” he adds.

Schmalz says instead of erasing history, we should make it even more visible.

“For instance, if you have a monument of a prime minister, or a president that had slaves or was abusive to minorities, let’s express that as well. Let’s bring it as a tool of education and informing, let’s not erase it,” he says.

“When I first heard the monuments go down, my heart was crushed. I’m a sculptor, we’re a brotherhood that goes throughout generations. I was so upset, and I thought, there must be something else. I heard about the idea of putting up a plaque and I thought, no, people don’t read plaques,” he says.

Schmalz describes the Monument of Oppression as a jail-like underground cell with hands reaching up.

Schmalz says these are the hands of history, hands from our past generation becoming visible again.

“It is so shocking when you see it, because it’s meant to be on the ground, it’s meant to be these figures, these hands coming out of the ground from the past, reaching out desperately for us to see them. It’s chilling,” Schmalz says.

Schmalz hopes the piece will be recast in bronze many times, and put in many different places.

“We can’t erase our history. It’s there. Embrace it, and learn from it,” Schmalz says.

Schmalz’s recent work includes a piece called "Angels Unawares" in hopes to shine light on the issue of human trafficking. 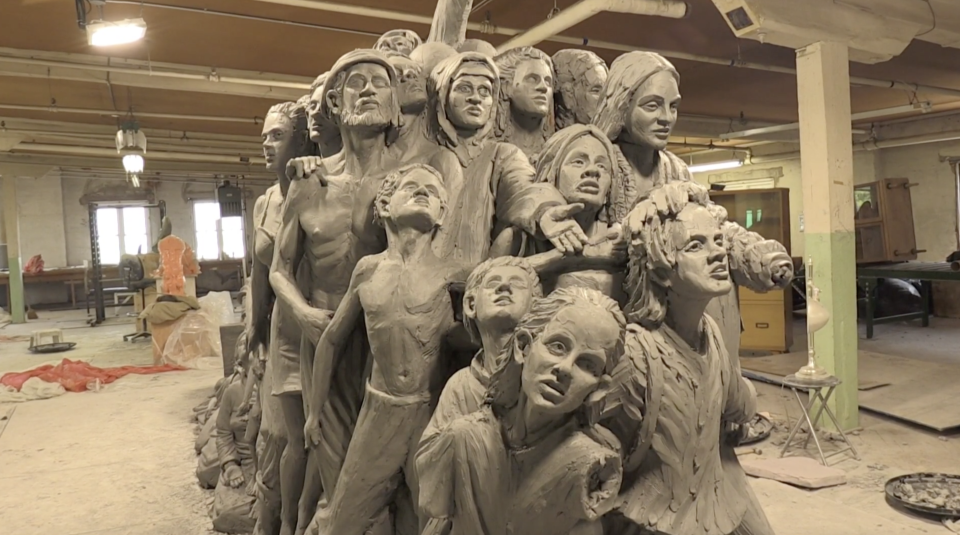 “It starts out with a slave from a previous generation,” he says. “She is opening up the ground and letting the modern day slaves free."

Schmalz says he wants people to understand that, in our normal everyday lives, there is another world people are living in.

“By bringing this issue out with art, it’s using artwork to its best ability,” says Schmalz.

A version of "Angels Unawares" is installed in St. Paul’s Basilica in Rome. This work depicts migrants and refugees from all cultural and racial backgrounds.

Schmalz believes many people are doing what they can to help frontline workers during this time.

He wanted to do something to show his support as well.

“I felt that because I’m a sculptor the best way that I could say thank you is by creating a piece of art work,” says Schmalz.

“Essentially what I did is a 3-D poem,” Schmalz describes his work. “It celebrates the courage and sacrifice that the healthcare workers are giving all around the world.”

Schmalz says it was important for him to incorporate the spiritual component.

“I achieved that by angel wings,” he says. “They are behind the healthcare worker, wrapping them, and holding the hands of the figure."

“Those wings are surrounding the world,” he adds.