Thousands of homes emptied out by an emergency evacuation order in Brantford were expected to remain empty into Thursday as the city braced for a secondary surge in the Grand River.

The city declared a state of emergency Wednesday morning due to what Mayor Chris Friel called a “shocking” level of flooding from the river.

An estimated 4,900 people in 2,200 homes were affected by the evacuation order.

Several schools near the river were closed, as were the Brantford Charity Casino and the Market Street parkade.

“If they haven’t already, residents in this area should immediately evacuate north of the floodplain area,” Friel said at a press conference.

Specifically, evacuations were being ordered on all areas in yellow on this map: 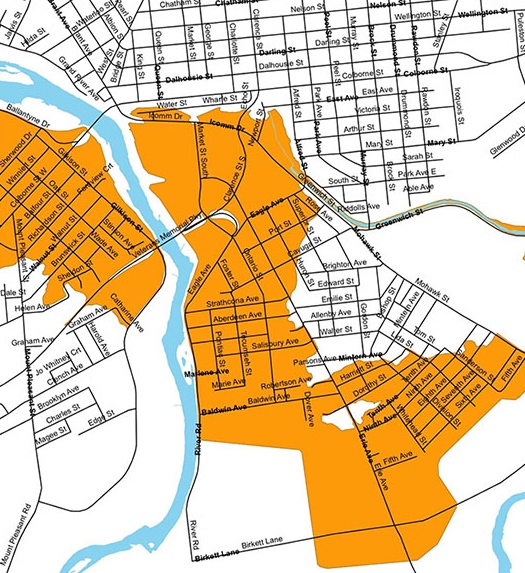 A number of major roads in the city were closed due to the high water levels, including the Lorne Bridge along Colborne Street, Veterans Memorial Parkway, Gilkison Road and Grand River Avenue. All trails near the river were also closed.

The Woodman Park Community Centre at 491 Grey Street was set up as an emergency shelter for people with nowhere else to go. A second shelter was opened in the gymnasium of Assumption College at 257 Shellard’s Lane.

According to Grand River Conservation Authority data, flows through Brantford peaked at more than 3,000 cubic metres per second around 8:30 a.m.

During the 1974 flood – generally considered one of the worst in the Grand’s history – flows in Brantford topped out at 1,800 cubic metres per second.

Flows remained above that historical high for most of Wednesday, falling only to 2,350 cubic metres per second by 5 p.m.

“The level and the height of the water is something that most people have not seen in this community for a very, very long time,” Friel said. 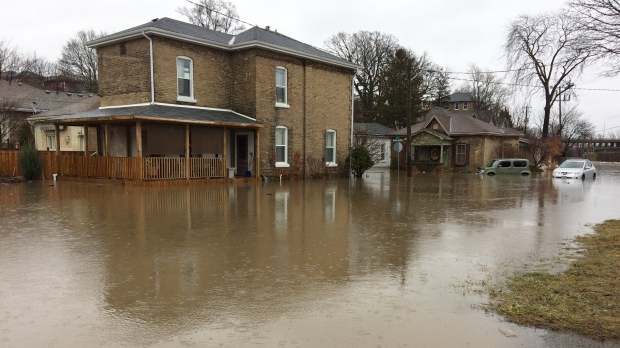 Authorities warned that people should stay away from the river for their own safety.

“This is not a viewing spectacle. This is a dangerous situation that remains dynamic,” Friel said.

“Stay away from the river – and that is not just for today or this afternoon or this evening, that will be for the next couple days at least.”

Dwight Boyd, the Grand River Conservation Authority’s director of engineering, said river levels had stabilized Wednesday morning but would remain high through Thursday as water from the Grand and Nith rivers made its way through Brantford.

Boyd said the suddenness of the flooding was due to a “dynamic” situation created by ice jams, including one near the Lorne Bridge and one downstream of the city.

The ice jams restricted the ability of water to flow through those areas, causing backups in parts of Brantford upstream of the jams.

“How it erodes or releases will determine how quickly levels will recede,” Boyd said.

“If the water erodes the ice and finds a good path through, you may see levels drop.”

Late in the day Wednesday, city officials described the situation as “volatile, highly unpredictable and deemed high risk” and said evacuation orders would remain in effect until at least noon Thursday.

Premier Kathleen Wynne visited Brantford Wednesday night to see the extent of the flooding for herself.

Speaking to reporters, she said the province had yet to ascertain the full extent of the damage from the flooding and praised local authorities for their role in managing public safety.

“Everyone here is doing everything that they can,” the premier said.

“At the provincial level, we are ready to provide support.”

That support includes inspectors from the Ministry of Transportation, who were to be dispatched to Brantford on Thursday to inspect the Lorne Bridge and Veterans Memorial Parkway bridge for signs of damage.

School closed due to the flooding Wednesday were slated to be closed again on Thursday. Local officials said water levels would rise again as the Nith River – which has caused flooding in New Hamburg and Ayr – fed into the Grand. The second surge was not expected to be as powerful as the first.

“(The GRCA) indicates high flows throughout the evening, with a secondary crest in the morning,” deputy fire chief Andrew Lillico told reporters.

A state of emergency was declared in Six Nations, and the river was expected to peak in the Caledonia and Cayuga areas late in the day Thursday.

“Cayuga is the place that we’re paying the most attention to right now,” Farwell said.

A Canadian Coast Guard ship was expected to return to the mouth of the river, at Lake Erie near Port Maitland, on Thursday to break up ice and potentially prevent ice jam-related flooding upstream.