KITCHENER -- A Gretzky family friend and a senior OPP officer have been identified as the two people arrested in a months-long investigation into the theft of Wayne Gretzky memorabilia from the house of Walter Gretzky.

According to the Brantford Police Service, 58-year-old Ken Hadall of Oakville was arrested and charged in the case. Police confirm to CTV Kitchener that Hadall was a friend of the Gretzky family.

Police said Tuesday he has been arrested and charged with theft over $5,000 and possession over $5,000.

Also charged as a result of this investigation is Insp. June Dobson, the detachment commander of the Grenville Ontario Provincial Police.

On Tuesday, police announced that the arrests had been made after more than US$500,000-worth of memorabilia was stolen from Walter's Brantford, Ont. home.

The Brantford Police Service was first contacted about the missing items in August. Among them were game-used hockey sticks, two jerseys, two pairs of gloves, hockey pants and a player-of-the-year award. 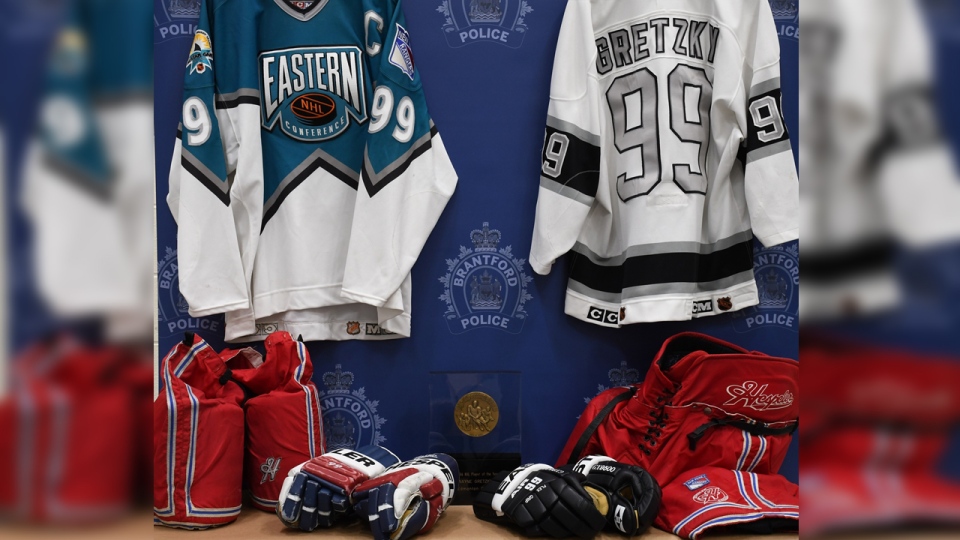 Police in Brantford, Ont. say that Wayne Gretzky memorabilia worth more than US$500,000 was stolen from his father's home. (Source: Brantford Police Service)

Those items had been sold to private collectors and were tracked down in Alberta.

She's facing charges of fraud over $5,000 and breach of trust.

Police had earlier said that the fraud involved a Wayne Gretzky hockey stick.

The Brantford Police Service did not initially identify the accused, but had said that they were known to the family.

It's not known whether the buyers of the stolen memorabilia will face charges, but police said on Wednesday morning that no additional charges had been laid.