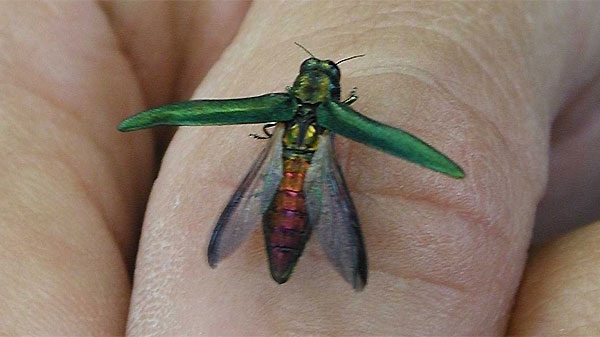 TORONTO -- An invasive species of insect that kills ash trees is cropping up in new areas of southwestern Ontario, threatening provincial forests, commercial woodlots and the landscapes of residential properties.

The emerald ash borer, a green Asian beetle that has been blamed for the loss of millions of trees across North America, is "gradually spreading," said Jim Penner of the Saugeen Valley Conservation Authority.

In the last few years, he said, the emerald ash borer wasn't advancing north, and "seemed like it stalled" after reaching Goderich on Lake Huron.

But now that has changed, he said, with the insect reported in Ripley and Point Clark, north of Goderich, as well as in Georgian Bluffs, north of Owen Sound.

"It's almost too late to really do anything with the population of the insect," Penner said, adding that along with confirmed sites of infestation, there are other areas of concern.

A Canadian Forest Service report in 2013 estimated that the costs for treatment, removal and replacement of infested ash trees in municipalities across Canada could reach up to $2 billion over 30 years.

It also found that within five years of an infestation beginning in an area, up to 98 per cent of ash trees succumb to the pest.

The emerald ash borer has ravaged forests across the United States, after the beetle was discovered in Detroit, Mich., in 2002. Shortly after, the insect was found in Windsor, Ont.

Penner said the emerald ash borer insect will lay eggs in the upper crown of a tree, and once the larvae hatch, the insects will bury into the stems.

"It gets in underneath the bark and mines a serpentine path back and forth," he said, adding that while one insect won't significantly damage a tree, infestations are deadly.

The beetles will move down the tree, causing the areas to "girdle," Penner said, explaining that the tree is strangled and can't harvest nutrients or water.

"It dies of dehydration and starvation," he said.

There are five native species of ash tree in Ontario, and all are affected by the emerald ash borer.

Allison Barr, spokeswoman for the Canadian Food Inspection Agency, said there is a "regulatory zone" in southwestern Ontario that aims to quarantine infected ash trees.

It's illegal to move ash wood or firewood of any kind out of this zone, she said, adding that the transportation of firewood is a major catalyst for the spread of emerald ash borers.

"If we can not hasten it, it gives communities more time to deal with it," Barr said, adding that the insects can sprout up in "pockets" and are unpredictable in their movements.

Penner said there are experimental control measures underway, including a research project that releases parasitic wasps to kill the beetle larvae.

But he said it will take a number of years to know if this project could quell the spread of the invasive species.

For the protection of individual trees, such as those on residential properties, one option is inoculation, he said.

This can come with a price tag upwards of $300 for a large tree, Penner said, and it lasts two years.

Ash wood -- used for furniture, barn timbers and flooring -- make up a significant portion of the forestry industry, he said, warning that there's a risk ash trees will be absent from Ontario's landscape in the future.

The reasons for the insects' movement north is also under debate, with climate change as one possible explanation, Penner said.

"A lot of these invasive insects have been brought into our country either by shipping containers or by wood that hasn't been treated," he said.