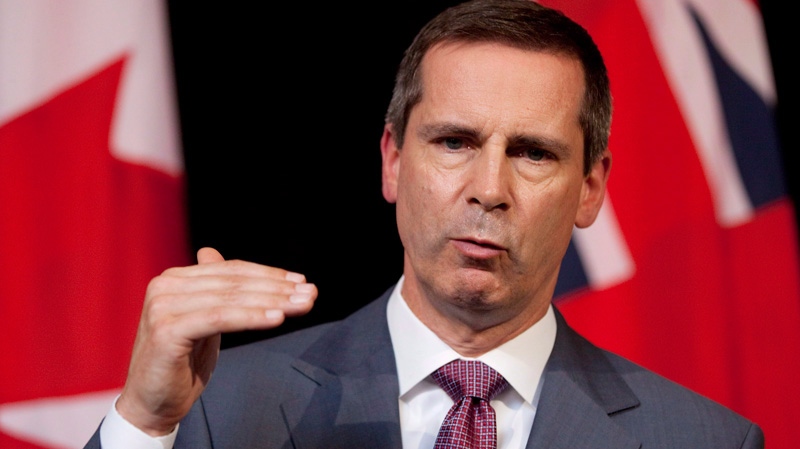 TORONTO -- Premier Dalton McGuinty is making a pitch for a majority government ahead of two potentially game-changing Ontario byelections this week.

While he's focused on reducing Ontario's $15-billion deficit and moving ahead with anti-strike legislation for teachers, a majority would help speed things along, McGuinty said Tuesday.

"It's always a little bit easier when you have a majority to act on a mandate, whether you're trying to introduce a budget or moving ahead with a Putting Students First Act," he said after touring a French school in Toronto.

"But I have an abiding confidence in the collective wisdom of voters and whatever they decide, we will respect."

If the Liberals win both byelections in Vaughan and Kitchener-Waterloo on Thursday, they'd be able to form a majority.

But if those voters decide to leave the Liberals in a "minority circumstance," McGuinty said he'll continue to elicit the support of one of the other parties to move ahead with his agenda.

The NDP helped pass the spring budget, while the Tories are supporting the teachers' bill, which would rein in wages and cuts benefits.

McGuinty may want a majority, but he doesn't deserve one, the opposition parties said.

"I hear this over and over again when I'm in Kitchener-Waterloo or Vaughan," said Progressive Conservative Leader Tim Hudak.

"People say that Dalton McGuinty does not deserve a majority government. He hasn't earned it. In fact, far from it."

Since last October's provincial election, taxpayers have learned that they'll be stuck with the $190-million bill to cancel a gas plant in Mississauga to save Liberals seats, an ongoing scandal at Ontario's troubled air ambulance service and the revelation that 98 per cent of eligible top bureaucrats received bonuses last year, Hudak said.

McGuinty has twice rebuffed a call to appear before an all-party legislative committee looking into Ornge, he added.

"And the list goes on and on," Hudak said. "People are shaking their heads, saying, 'Now he wants a majority?"'

The NDP are "even more of the same," calling for more spending and interference in business that won't create jobs or balance the books, Hudak added.

But the Opposition leader may find himself in a jam if the Tories don't hang on to Kitchener-Waterloo, which was held for 22 years by former cabinet minister Elizabeth Witmer.

Hudak down played those concerns Tuesday.

"It was more of a Witmer seat than I'd say a Tory seat or a Liberal seat or an NDP seat," he said.

"But we take it very seriously, and we'll be fighting each and every hour until byelection day to get our message across."

The NDP, which has little to lose in the byelections, cautioned voters against handing McGuinty a majority.

"The premier has been irresponsible, the premier's willing to play games with public money for party gain," said New Democrat Peter Tabuns.

"I don't think he deserves a majority. He deserves to be defeated."

Asked whether his appeal for a majority would be bolstered if the sovereigntist Parti Quebecois wins the election in Quebec, McGuinty was tight lipped.

"Whatever Quebec voters decide will be right for Quebec," he said. "And I will work hard in my capacity as leader of the government in Ontario to extend a hand of friendship to the new Quebec leadership."

Quebec and Ontario have lots in common and have even held joint cabinet meetings, he said.

While there will always be differences between Canada's provinces, their leaders are responsible to rise above them and focus on what they have in common, he said.