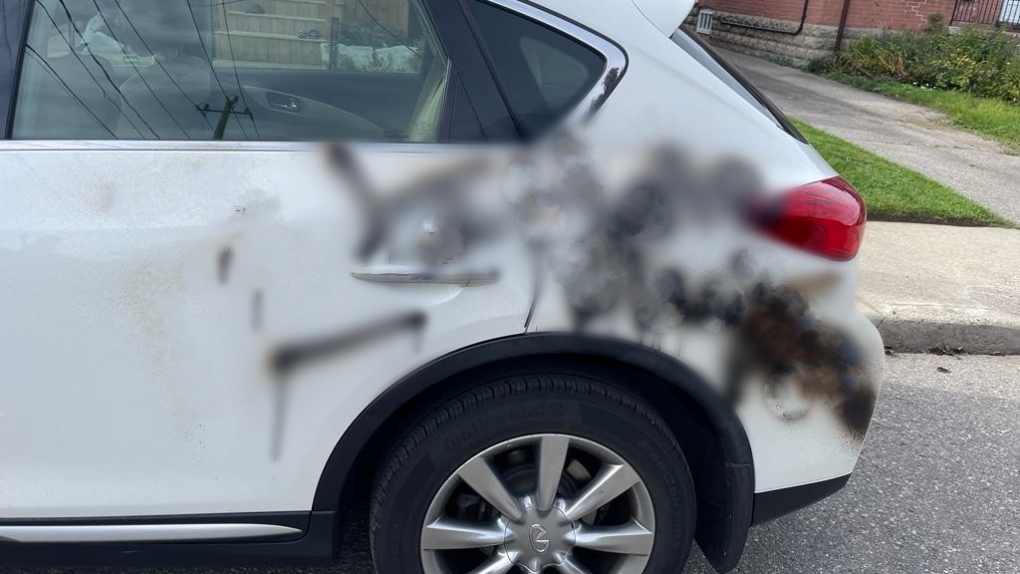 A hate symbol and racist messaging were spray painted onto the driver's side of Malini Sampson's car in Brantford. CTV News has blurred this image. (Submitted)

Several reports of hate-motivated vandalism in Brantford have police appealing to the public to find the person or people responsible.

Brantford resident Malini Sampson said someone drew a hate symbol and racist messaging on the driver’s side of her car.

“It took me a while to digest this,” Sampson said. “It was kind of disbelief. I’ve been living in Canada for over 30 years, and I’ve never had to deal with something like this, so I was very taken aback.”

Sampson said while this is the first time she’s ever experienced anything like this in the neighbourhood, if something similar happens again, she may have to move elsewhere.

“It’s a very nice street we live on. The neighbours are very nice. Everyone's been very nice since we moved in. So, even the neighbors came over and they apologized for you know, they said, ‘just to let you know, this doesn't happen. This has never happened.’ They wanted to show us that this is not something that happens here all the time, and they were very shocked by it,” Sampson said.

“Whether this was intended or it was just someone, just some kids, being silly, we need to bring attention to it, because it's not okay,” Sampson said.

Cars were reported vandalized on these streets:

Ontario education support workers have voted to accept a new deal with the provincial government, putting an end to a long and contentious negotiation process.

Bob McGrath, an actor, musician and children's author widely known for his portrayal of one of the first regular characters on the children's show 'Sesame Street' has died at the age of 90.

Former U.S. President Donald Trump faced rebuke Sunday from officials in both parties after calling for the “termination” of parts of the U.S. Constitution over his lie that the 2020 election was stolen.