KITCHENER -- If you have big weekend plans, you may want to reconsider – travel is expected to be treacherous across Southern Ontario, likely lasting well into Sunday.

Widespread special weather statements issued by Environment Canada have been in place for the weekend since early this week, as a significant winter storm approaches.

As of 3:31 p.m. Friday, a rainfall warning was in effect for Waterloo-Wellington.

The drizzle and scattered showers had already begun by that time. That pattern is expected to continue well into Friday evening.

Heavy and more widespread rain is expected to pick up and intensify into the overnight hours Friday through Saturday morning.

Strong southwest winds gusting to 70 km/h are also expected into Sunday morning, with the highest gusts along the shores of Lake Huron.

The mild temperatures are expected to persist through Saturday, but once temperatures start to drop, the precipitation will switch over to freezing rain.

Cottage country could see the first of it, but the freezing rain will move south as the cold air moves in, affecting Waterloo Region by late Saturday afternoon.

Some communities could see between six and 12 hours of prolonged freezing rain when all is said and done. These include Waterloo Region, Mount Forest, Goderich, the Bruce Peninsula, Elora, Fergus, Erin and even further east. 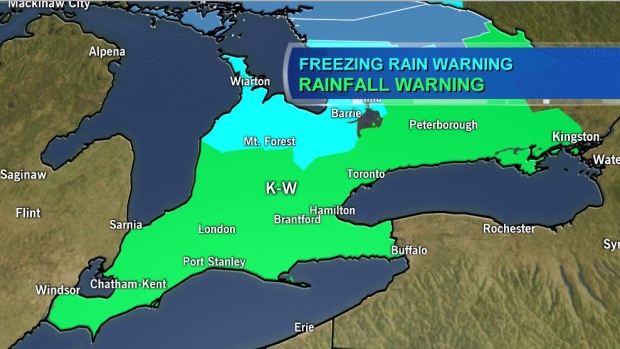 All-time January rain records in Kitchener-Waterloo could also be broken.

Rob Kuhn, meteorologist with Environment Canada, compiled the daily records for Kitchener-Waterloo. They're listed below.

There is a chance these records could be smashed, as we are forecasting  between 10 and 15 mm of rain overnight Friday and another 50-75mm of rainfall on Saturday in Kitchener-Waterloo.

Some communities in Southern Ontario, especially those along the shores of Lake Huron, could see upwards of 75mm of rain, while parts of the Golden Horseshoe could see 90mm.

The amount of moisture associated with this storm poses danger, especially where the ground is frozen. The ground is not able to absorb as much moisture at this time of year compared to the summertime.

That raises the risk for localized and widespread flooding.

It’s expected that much of the norther Grand River watershed (north of Elora) will see a prolonged period of freezing rain, while the southern watershed (south of Cambridge) will receive heavy rainfall and the central portion of the watershed (Cambridge to Elora) is expected to see a mix of heavy rain and freezing rain.

Map of the various levels of flooding. Please note at this time only level 2 is under a flood warning. pic.twitter.com/Q7S2geo8F0

The GRCA is reminding the public to exercise extreme caution around all water bodies, as banks near rivers are very slippery at this time of year.

Need some advice? Get your flashlights ready: strong winds, coupled with heavy rain and ice build-up on tree branches and power lines could result in power outages across the region.