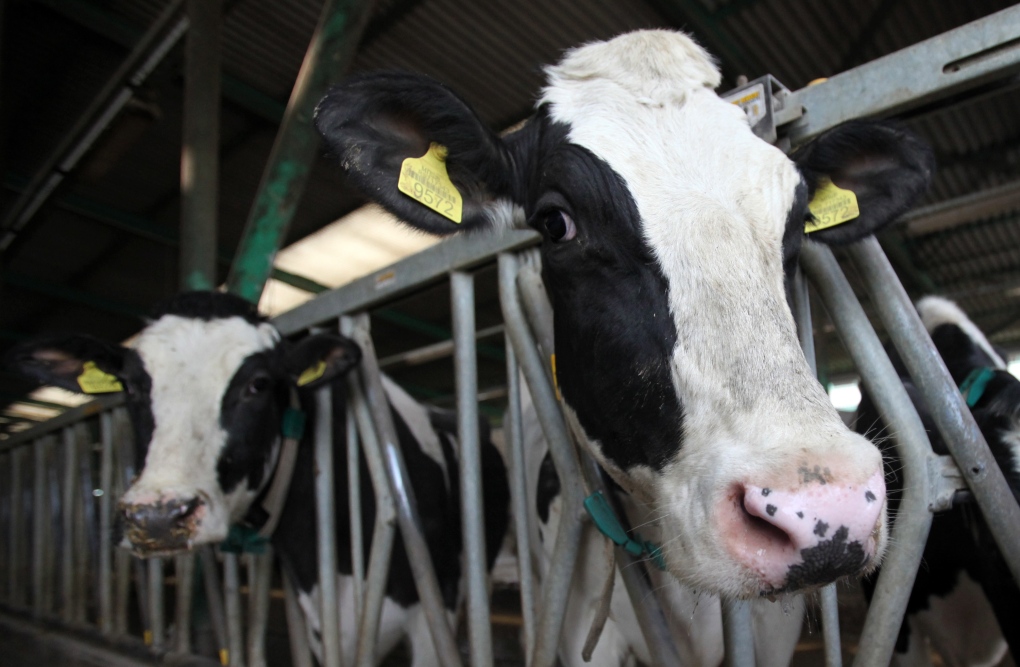 A cow looks through the bars at a dairy farm in Dobanovci, near Belgrade, Serbia, Wednesday, Feb. 20, 2013. (AP Photo/Darko Vojinovic)

TORONTO -- After paying off a loan from customers that kept her Monforte Dairy in business, Ruth Klahsen is launching a new initiative designed to help young farmers.

"I've always been fascinated by the idea of having land and using it in a good way and then a different way, so we came up with this model to buy this farm and put between eight and 10 young farmers on it in a way where they have land security so that they don't have to worry about land acquisition, that they'll be able to farm and make a living hopefully on the land without needing to buy it."

The owner of the artisanal dairy that produces delectable cheeses made with the milk of goats, sheep and cows from small local farms has backing from Farm Credit Canada and is getting administrative and promotional assistance from Farm Start, based in Guelph, Ont., which aims to help young people and new immigrants begin farming.

Klahsen plans a "pitch party" in November or December in which farmers will be able to promote their concepts. The lucky ones will each receive four to five acres.

She's hoping for innovative ideas, such as growing herbs to make bitters to aid digestion or "I'd like somebody growing organic flowers and selling them to the tourists on the way home and a couple of market gardeners and somebody doing hazelnuts and we could become the next Nutella. I just think you want a bunch of farmers doing a bunch of different stuff."

Klahsen is optimistic the farm's location on Highway 7-8 will entice theatre-goers driving past to attend the Stratford Festival.

She is about halfway to the $250,000 she needs by Sept. 30 to launch the program. There are three subscription levels and in exchange for their investment customers receive vouchers that can be exchanged for cheese and other products at the dairy, Home Farm, participating markets and retailers and the restaurant in Stratford.

Klahsen is also keen to use the farm for education, following the model of River Cottage and the School of Artisan Food, both of which are on farm properties in England. She plans to visit them this fall to see if any of their strategies can be applied to Monforte Home Farm.

She's even had some royal advice. Klahsen met Prince Charles during his 2012 visit to Canada and hopes she'll be able to pick his brains again when she's in England. She has sent a letter asking to meet with him.

His Duchy Home Farm in southwest England operates on organic and sustainable principles. Produce is sold in vegetable boxes, wholesaled to supermarkets and restaurants and used in products.

"He was great because I said, 'The spoon in my mouth is not the same silver as is in yours,"' Klahsen relates.

"I just said, 'What is a Canadian model, a working class model, of having people be tenants on the farm and treating them appropriately and giving them access?' We had quite a long conversation about that. It was great actually and that was when I really started thinking about how I can do this as a Canadian model of that kind of feudal system and what is appropriate and what we can do.

"I was so impressed with him, with just his thought process, not because of who he was but because of his ability to articulate those kind of principles."