Sound familiar? BlackBerry tablet could be on the way, Chen says 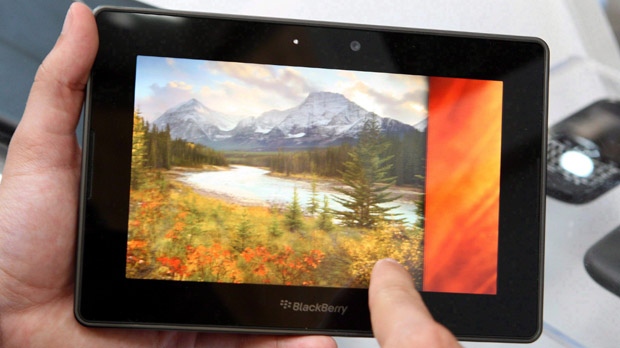 An employee holds a Blackberry PlayBook tablet at the Research in Motion annual meeting in Waterloo, Ont., Tuesday, July 12, 2011. (The Canadian Press/Dave Chidley)

BlackBerry's logo may soon appear on more than just smartphones as CEO John Chen says the company is expanding its software licensing business.

The former smartphone leader said last year it was exiting the hardware business in favour of focusing on its growing software division. It has since inked licensing deals to put its hardware into phones manufactured by partners and opened a research centre for autonomous cars to help it capitalize on the burgeoning self-driving vehicle market. It is also in talks about a new BlackBerry-branded tablet.

While the potential tablet deal is the closest to coming to fruition, Chen said in a media roundtable that he's looking into putting BlackBerry software into wearables, appliances and medical devices.

"We (would) actually like to have our software technology and secure technology embedded into everything," he said.

Chen's comments came after the company reported stronger-than-expected quarterly results, sending its shares soaring 11 per cent to $10.29 in afternoon trading in Toronto.

Licensing deals would follow a similar model to existing arrangements in place with partners who can design, manufacture and sell BlackBerry-branded smartphones, using the company's software, in exchange for royalties per phone.

Earlier this year, BlackBerry partner BB Merah Putih launched the Aurora for the Indonesian market. In February, TCL Communication Technology Holdings Ltd. (TCT) revealed a BlackBerry-branded phone with the classic physical keyboard, which is expected to be sold in Canada and several other countries soon.

Chen said he expects to see some revenue from the Aurora this quarter, while TCT's KEYone device likely won't start shipping until May.

He said he'd be disappointed with one million units sold and expects the licensing agreements, in total, to pay royalties on multimillion units annually.

When the company reports its next quarterly results, Chen said he expects to disclose how much the company made from royalties, which will include fees from the handset deals.

BlackBerry said its fourth-quarter loss under general accounting rules, reported in U.S. dollars, was $47 million, or nine cents per share -- a big improvement from the $238-million loss it had at the same time last year.

Revenue for the quarter fell 38 per cent to $286 million.

But BlackBerry's report was more focused on its adjusted profit of four cents per share, which outperformed the consensus estimate.

The company also did better than the estimate of a loss of 13 cents per share and revenue of $289 million, according to Thomson Reuters data.

"I wish every quarter will be that easy," Chen said, adding the company had one of its strongest quarters to date for software billing.

But while the company has completed its turnaround, he said performance will not be a straight line upward. The biggest challenge for the company remains finding the channels to get its products to clients, Chen said.

"I do believe, however, we're going to have more good quarters in the future than in the past few years," he said.

Chen expects the company to grow its software and services business between 13 and 15 per cent -- at or above average market growth -- this fiscal year.