Sexual assault of girl, 4, under investigation by police

Police say a four-year-old girl was sexually assaulted at a Kitchener apartment building.

The incident allegedly happened around 8 p.m. on July 6 at a property on Brybeck Crescent.

The information wasn’t released to the public until Monday afternoon, police say, because it took some time to gather details about what happened.

Police say the girl was playing in the common area inside an apartment building when she was approached by a man and sexually assaulted.

Officials say she was taken to a local hospital but has since been released. A neighbour says she saw the girl being loaded onto a stretcher.

The suspect is described as a white man, between 5’10 and 6’1 with a medium build.

He was reportedly wearing a white baseball hat and grey striped t-shirt.

Police released a still from surveillance video of a man who was in the area at the time, and say they want to speak to him "in order to determine if he is related to the incident and/or can provide further information." 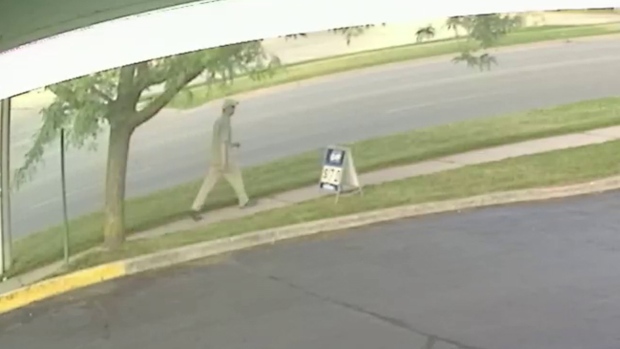 Police set up a command post on Tuesday and say there will be an increased police presence in the area while they investigate and canvass the neighbourhood.

While residents are taken aback that this has happened so close to home, it isn't the first such incident in the region.

In February of last year, police said that DNA evidence linked two other sexual assaults in 2013 and 2017.

Both involved young girls and happened in apartment buildings.

The earlier incident happened on Barrie Place in Waterloo while the other happened on Patricia Avenue in Kitchener.

It's believed that the suspect in those cases remains at large, but it's not yet known whether Saturday's incident is also connected.

“That is something that investigators will definitely consider,” says Cst. Andre Johnson. “They will look at past incidents to see if there is any correlation or any links at this time. It’s too early in the investigation to say.”

Anyone with information is asked to contact police or call Crime Stoppers.