A tornado watch has ended for northern Wellington County, Mount Forest, and Arthur.

A severe thunderstorm watch was also in effect for Wellington County and Waterloo region.

Environment Canada said conditions Wednesday afternoon and evening were favourable for the development of severe thunderstorms and tornados in some areas.

In northern Wellington County, winds gusts of 90 to 110 km per hour and nickel to toonie-size hail were possible.

As of 7 a.m. Thursday, no weather warnings were in effect for the area. 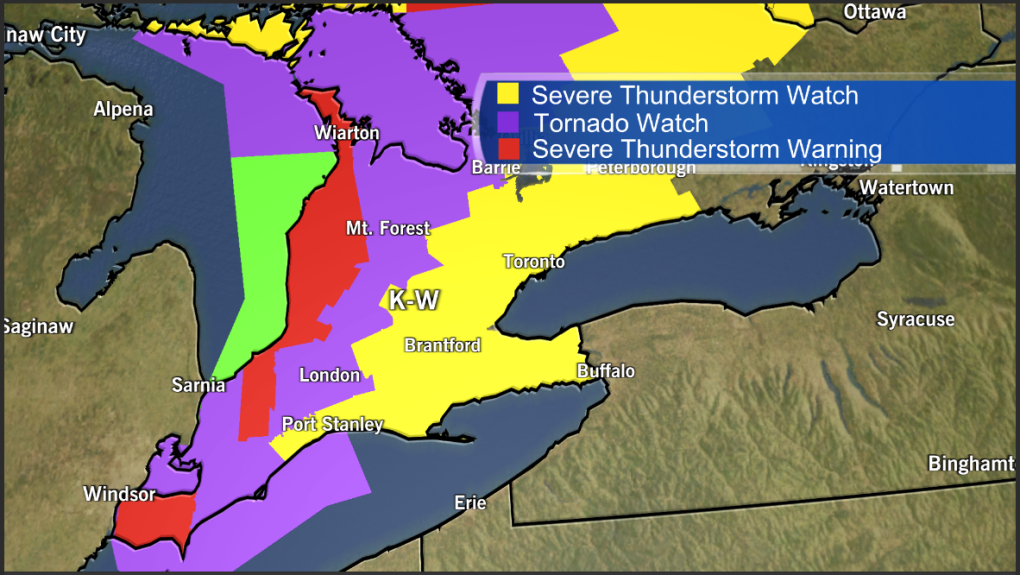 Weather alerts have been issued for all of southern Ontario Wednesday afternoon and evening. (Graphic created by Will Aeillo/CTV Kitchener)

Thunderstorms developing over eastern Michigan were expected to begin to affect Wellington County and Waterloo region by the afternoon.

“A few tornadoes are possible some if which may be strong,” Environment Canada said.

The greatest probability of tornadoes was mid to late Wednesday afternoon.

Residents were advised to be prepared for severe weather and take cover immediately if threatening weather approaches.

In the event of a tornado, Environment Canada recommends the following:

The tornado watch came as the region and most of southern Ontario are under a heat watch, issued Monday.

Temperatures in the region soared to a high of 33 C on Tuesday, with humidity hitting 49 per cent.

On Wednesday morning, Environment Canada reissued the heat warning for the area.

A high of 31 C, with a humidex values in the upper thirties, was expected throughout the day.