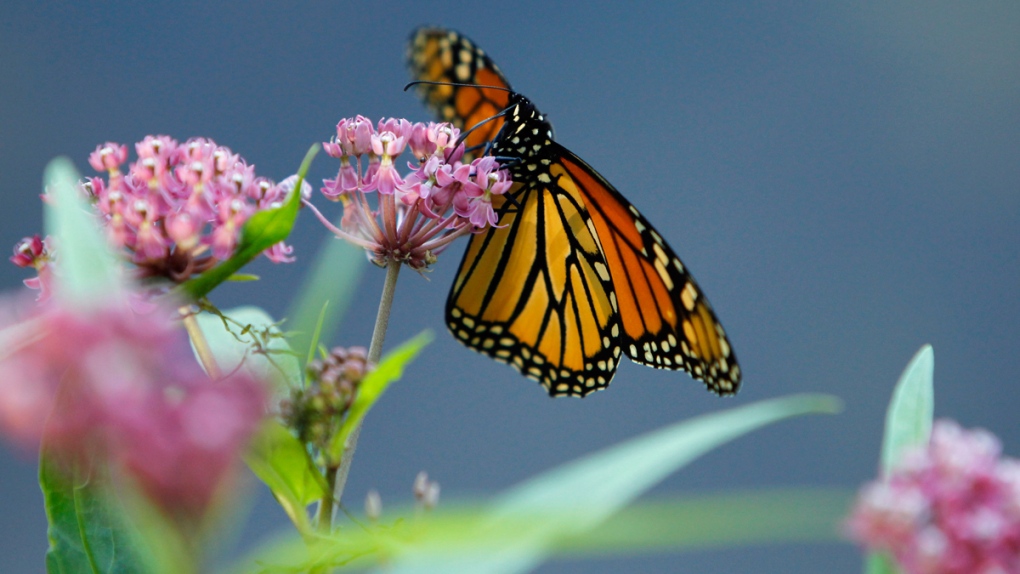 TORONTO -- A concerted national effort to plant the traditionally unloved milkweed is needed to reverse a precipitous decline in the monarch butterfly population, conservationists say.

They're hoping the federal government will step up with money and moral suasion to aid in an effort they say needs to include power line, road and rail agencies.

Estimates are that the migratory monarchs have declined by 90 per cent across North America over the past two decades, in part because of the eradication of milkweed, the only food plant the butterflies use as caterpillars.

Essentially, no milkweed means no monarchs.

"Because the monarch population is basically in a downward spiral, getting milkweed in the ground is the most important thing."

Most monarchs -- described by the federal government as a "symbol of international co-operation, conservation and appreciation of nature" -- migrate along various routes through the United States between Canada and Mexico.

In Canada, they are mostly found in southern Ontario, southwestern Quebec, and the most southerly parts of Manitoba and British Columbia.

Like other pollinators, they are considered an indicator species of the overall health of the environment.

"There's something magical about monarchs," said Rachel Plotkin, a science projects manager with the David Suzuki Foundation. "Seeing a monarch is like the insect equivalent of seeing a rainbow or finding money on the ground."

On the other hand, the prolific milkweed has traditionally been viewed or officially listed as a noxious weed, even poisonous to livestock, and hence a target for herbicides.

However, conservationists say the weed can be easily controlled in an agricultural setting while being grown and facilitated along roadways or hydro rights of way to aid the monarch and other pollinators.

Last year, Mexico, Canada and the U.S. committed to action to safeguard the species. Mexico has acted to preserve forests where the butterflies rest, while federal and state agencies in the U.S. have promised US$3.2 million for programs to grow milkweed in schoolyards and gardens and on highway roadsides from Mexico to Minnesota.

"Canada, so far, remains quiet; it just needs to show the monarchs some love and start putting some resources towards habitat restoration," Plotkin said.

"For monarch populations to recover, we need to launch some aggressive restoration initiatives that see milkweed springing up."

A spokeswoman for Environment Canada said in an email the federal government was working to develop a strategy to mitigate threats to the monarch, designated as a species of concern.