Remembering the victims of the Edmonton armored car shooting 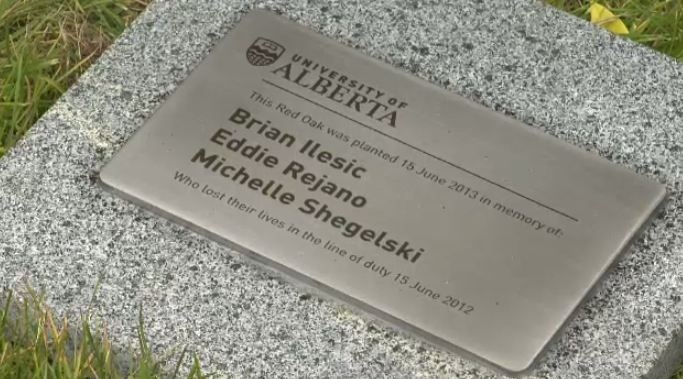 Memorial plaque for Eddy Rejano, Michelle Shegelski and Brian Ilesic. Who were shot and killed on June 15, 2012

One year ago, on June 15 three armored car guards were shot dead on the job in Edmonton.

For the lone survivor Matthew Schuman the anniversary is a very difficult day. Now home in Cambridge, he continues to recover from his serious injuries.

While in Edmonton his colleagues were remembered that fatal day.

An honour guard is piped into a tent at the University of Alberta. Wreaths were laid for the three guards killed at the Hub mall. A red-oak tree was planted as a memorial with a plaque for Eddy Rejano, Michelle Shegelski and Brian Ilesic, was unvailed.

One of the first officers on scene was staff sergeant Erik Johnson.

“The sheer scope of the tragedy… Losing 3 guards and having one so horribly injured just really affected everybody.”

When he arrived he could hear cries from the fourth victim Matthew Schuman and used a battering ram in a desperate attempt to reach him.

“Anytime you see a uniform down, be it a police officer or anything it definitely hits home with our officers.”

Schuman’s family has shared these photos of his time in hospital.  He continues rehab to work on his reading and writing skills. They say the anniversary is a difficult time for him, bringing up painful memories.