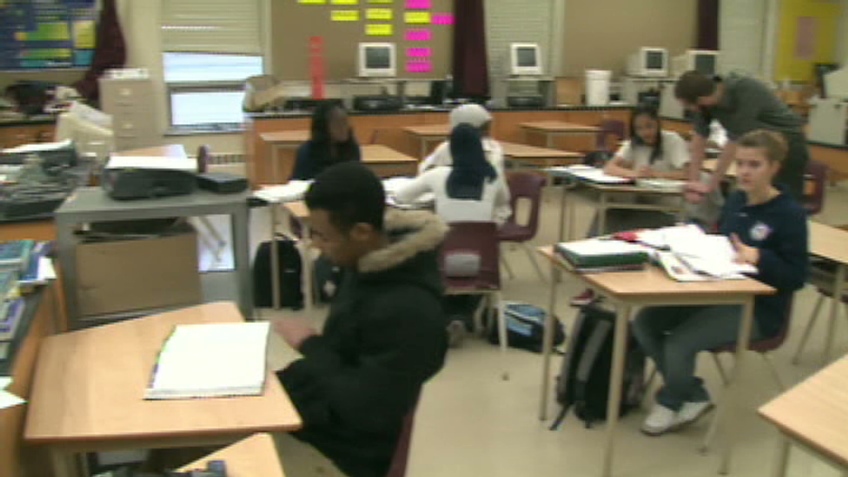 The Ontario Liberals reached an agreement with the Ontario English Catholic Teachers Association on Thursday July 5.

TORONTO -- Speedy public hearings on anti-strike legislation for Ontario teachers ended Thursday after less than 24 hours, bringing the minority Liberals another step closer to putting the controversial bill to a final vote next week.

An all-party committee wrapped up its examination of the bill, which would force new contracts on the majority of teachers and education workers in the province.

The legislation would rein in wages, impose unpaid days off and cut benefits, such as ending the practice of banking sick days that can be cashed out at retirement.

It's based on an agreement the province reached with English Catholic and francophone teachers, but has been rejected by the two biggest unions representing elementary and high school teachers.

The committee, which heard from unions, advocacy groups and trustees and principals' associations, had just a few hours to consider the bill that's being rammed through the legislature.

The union representing English Catholic teachers expressed dismay that even though it signed the agreement with the province, it still has to hold strike votes as a result of some "aggressive" moves by local school boards.

Elementary teachers in Dufferin-Peel voted 91.8 per cent in favour of a strike after the school board asked for conciliation, said Kevin O'Dwyer, president of the Ontario English Catholic Teachers' Association.

The union has had to schedule other strike votes in order to deal with some boards -- who employ teachers -- and protect their collective agreements, he told the committee.

Some boards are taking an "over-the-top" approach and 13 have applied for conciliation, which allows the Ministry of Labour to help both sides reach an agreement.

But some boards are trying to unilaterally change the agreement through that process, which is "provocative," O'Dwyer said.

"There's only one thing a union can do, is pull a strike vote and exercise that strike vote if need be," he said.

"That was the position we were put in, in spite of -- irony of ironies -- signing a memorandum of understanding with the government of Ontario."

If the conciliator is unable to help the parties reach an agreement, a no-board report is issued, which starts the clock on a possible strike or lockout.

Other boards, such as the Toronto Catholic and York Catholic, have signed on to the provincial agreement.

Government officials say the legislation wouldn't stop the conciliation process, but it would give the government tools over at least two years to end a strike or lockout.

"We have sought to accelerate this process to see this legislation passed because agreements in place lead to a structure where we will have peace and stability in our schools," said Education Minister Laurel Broten.

"And even more importantly, we will keep the dollars in the classroom."

But others argue the bill goes too far.

Andrew Lokan, counsel to the Canadian Civil Liberties Association, said the bill is unconstitutional and undemocratic by quashing the right to strike.

"The government has called this bill the Putting Students First Act, but a more honest title would be 'Putting Democracy Last,"' he said.

The association has joined a chorus of criticism over the bill, which three unions vowed to take it all the way to the Supreme Court of Canada.

"The government says that it's acting to support education, but this bill may be teaching students the wrong message," Lokan said.

"That is, if you're a minority government, you should attempt to bypass the legislature by giving cabinet, rather than the legislature, the right to intervene. If you're worried about negotiated settlements, you should grab power by legislating in advance instead of letting people exercise their rights."

The public hearings began Wednesday evening and ended mid-morning Thursday, leaving the committee to wrap up its work in the afternoon. It must deliver its report to the legislature on Monday.

The bill is expected to pass either Monday or Tuesday, with the help of the Progressive Conservatives.