Province moves ahead with construction of Morriston Bypass project 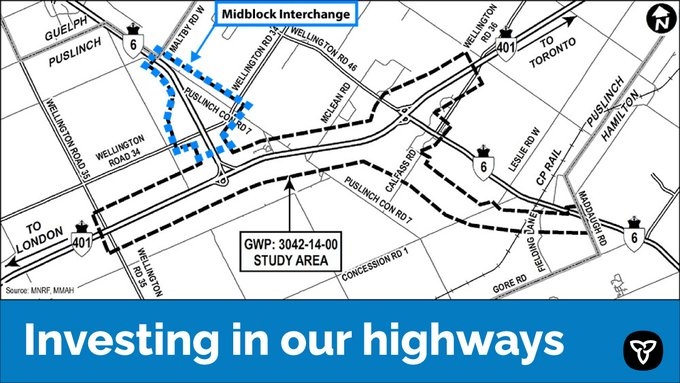 The Ontario government announced Monday afternoon in Morriston that it’s moving ahead with construction of a new interchange for the Morriston Bypass project.

“This project will enhance safety by improving flow for Highway 6 traffic between Highway 401 and Guelph,” said Caroline Mulroney, Ontario’s transportation minister at the announcement.

This is phase two of three for the Morriston Bypass project.

Some of the main goals include eliminating gridlock across Highway 401, and improving the link between Hamilton and Guelph.

Construction on the new interchange will begin once the design phase is complete, which could be as early as this year.

That means the interchange portion of project could be complete by as early as 2025.

Design work on future phases of the project is underway.

The Morriston Bypass project is part of the Ontario Highways Program. As part of the government’s 2022-23 budget, the province will commit about $3 billion to repair and expand provincial highways and bridges.

The budget includes funding for new bridges on Highway 7 over the Grand River in Kitchener.

Our government is #BuildingOntario, and that includes moving forward with the Morriston Bypass project by advancing the new mid-block interchange on Highway 6 through Guelph!

Watch the video below to learn more 👇 pic.twitter.com/SrY6lptbfJ

— Ontario Ministry of Transportation (@ONtransport) May 3, 2022

The gunman who attacked an Independence Day parade in suburban Chicago, killing at least seven people, legally bought two high-powered rifles and three other weapons despite authorities being called to his home twice in 2019 after he threatened suicide and violence, police said Tuesday.

Thousands of delegates gathered for the annual Assembly of First Nations meeting Tuesday to talk about the Pope's visit, Indigenous rights, housing and other priorities, but those issues were upstaged by claims of corruption and infighting over the leadership of National Chief RoseAnne Archibald.

With doctor shortages causing emergency rooms around the country to shut down, a northern Ontario hospital is scrambling to stave off the same fate.

More than half of Canada's AstraZeneca vaccine doses expired, will be thrown out

Canada is about to toss more than half of its doses of the Oxford-AstraZeneca COVID-19 vaccine because it couldn't find any takers for it either at home or abroad.