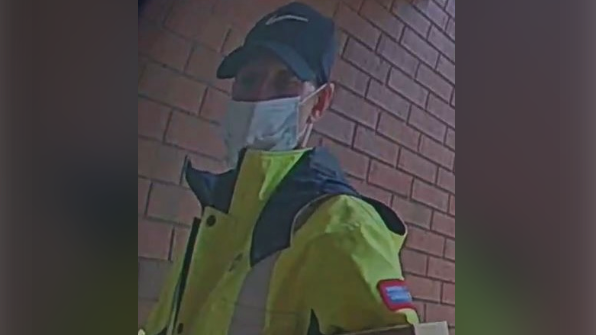 Police are looking for this person following an attempted home invasion on July 12. (WRPS)

Police are looking to identify a person who posed as a Canada Post worker during an attempted home invasion on July 12.

Police say a second individual brandished a handgun during the incident.

A resident at a home in the Morgan Avenue and River Road in Kitchener area answered their door for a male wearing a Canada Post jacket and carrying a parcel. Police say when the victim opened the door, the male pushed his way inside the residence, followed by a second male brandishing a handgun.

The victim was able to close and lock the door and the two suspects fled the area on foot.

Police describe the first suspect as a white male, wearing a Canada Post jacket, a black Nike hat, a medical mask, gloves and was carrying a box.

Police described the second suspect as a male carrying a firearm.

Police released a photo of an individual that they would like to identify and speak to in connection with this incident.