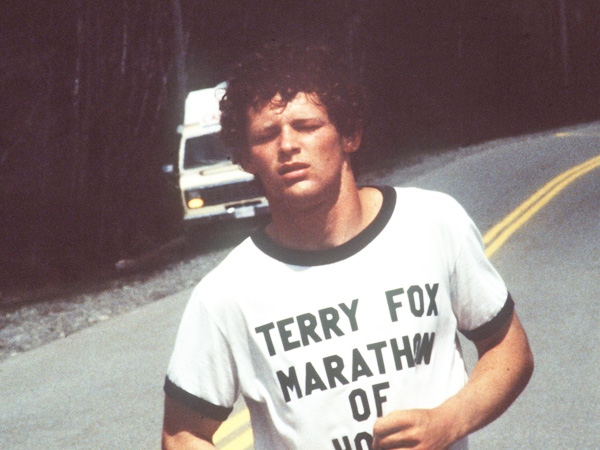 In this 1980 file photo, Terry Fox runs to raise awareness for cancer in the Marathon of Hope. (The Canadian Press)

OTTAWA -- Canadians have handed the Harper government a Top 10 list of the country's greatest heroes, featuring some of the Conservative party's greatest adversaries, past and present.

The list, compiled from online consultations in the run-up to Canada's 150th birthday in 2017, includes Pierre Trudeau, Jack Layton, David Suzuki and Lester B. Pearson.

About 12,000 Canadians participated in the online exercise, which began Dec. 11 and closed last month.

A five-part digital form included the question: Which Canadians have inspired you the most over the last 150 years?

The Canadian Heritage Department extracted a Top 10 list for an April 29 briefing note for the minister, Shelly Glover.

The consultation also asked which of Canada's accomplishments of the last 150 years "make you most proud to be a Canadian?"

Medicare topped that list, followed by peacekeeping, then the 1982 Charter of Rights and Freedoms at No. 3.

The Conservative government, which has recently been buffeted by a series of Charter-based losses at the Supreme Court of Canada, did not mark the 25th anniversary of the Charter in 2007, nor the 30th in 2012.

The briefing note and related documents were obtained by The Canadian Press under the Access to Information Act.

Glover said the exercise was simply to consult Canadians about how to celebrate 2017, adding "we have no intention of making a kind of final list."

"Every community is going to have their own personal list. ... We will not be telling people whom they ought to be celebrating."

"The consultations were not partisan in any way shape or form," she said in an interview from her Winnipeg riding, noting for example that many Canadians do not regard Tommy Douglas as a New Democrat politician but simply as the father of medicare.

The government has yet to announce its budget and "overall theme and focus" for the 2017 celebrations. Glover would not provide a timeline.

But she said all events will be planned in partnership with provinces, communities and the private sector, include sharing costs.

A spokeswoman for Liberal Leader Justin Trudeau, Kate Purchase, declined comment on the high position of his father on the Top 10 list of heroes.

The briefing note warns the results of the online consultations cannot be viewed as representative of the entire population, because participants self-selected.

In the end, the exercise identified more than 1,100 "inspirational" Canadians and more than 600 accomplishments.

In February, Canadian Heritage took a sample of 1,540 responses from the first 5,000 questionnaires filed, adjusting them to be regionally balanced based on population, and then produced the Top 10 lists.

The early sample was taken "so the results would not be skewed by publicity surrounding the Sochi Olympic Winter Games."

Cabinet ministers have also held at least 20 roundtables since December, asking participants the same questions about heroes and accomplishments. Those Top 10 lists looked very similar to those of the online survey -- though there, Sir John A. did not make the grade.

A House of Commons committee in September 2012 pressed the government to start planning for the 150th birthday celebrations "as soon as possible," noting the planning for Canada's 1967 Centennial bash took eight years, launched by Progressive Conservative prime minister John Diefenbaker.

The 1967 celebrations cost about $750 million in today's dollars.