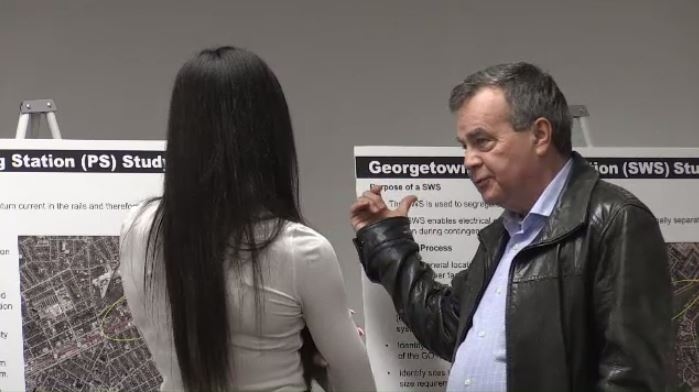 Representatives from Metrolinx were in Kitchener to talk to residents about electrification of the Kitchener Line.

KITCHENER – The plan to electrify the GO train line serving Kitchener was on the table at a public forum on Monday night.

Metrolinx representatives were on hand at the Kitchener Central Library to share details about the steps required to eventually electrify the line; specifically, the corridor between Georgetown and Kitchener.

Officials stress that replacing diesel trains with electric ones is only part of the plan to build the Kitchener Line for the future.

“Electrification is one piece of the puzzle and we’re looking specifically at this piece of the corridor we own,” says Metrolinx senior community relations manager Leona Hollingsworth.

This meeting is the first of several planned over the next year as the electrification plan continues to take shape.

A firm plan for electrification of the corridor is expected by 2021.

The plan to transform the line calls for several changes, including a proposed new station at Breslau.

Metrolinx is also working on building a fourth track on the Kitchener Line to help reduce delays caused by train traffic.

Two-way, all-day GO train service was also a topic of discussion at the meeting, but Metrolinx says that is not dependent on electrification of the corridor, and vice-versa.

The two-way, all-day service could be in the city as early as 2025.