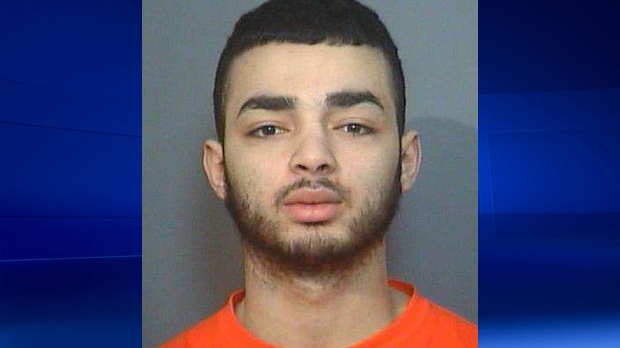 Goran Kakamad, who also goes by the name Moe, is wanted by police in Brantford and Hamilton.

A man wanted for allegedly firing a gun in a Brantford parking lot is also being sought by police in connection with a case in which several shots were fired at a home in Hamilton.

The man in question is Goran Kakamad, who police say should be considered armed and dangerous and should not be approached.

He is described as being 21 years old, Middle Eastern in appearance, 5’7” and 152 pounds, with short, straight black hair and a short beard. Police say he also goes by the name Moe.

Hamilton police say he fled a traffic stop on Oct. 7. Officers had been trying to pull over his vehicle because it was allegedly seen driving away from a house where several shots had been fired the previous night.

The Brantford incident occurred two days later, in the parking lot of a townhouse complex on Darling Street.

Police say Kakamad is one of three men who was seen arguing in the parking lot. A gunshot was heard during the argument, although no damage or injuries were reported.

Kakamad is wanted in Brantford for various offences relating to criminal use of a firearm and unauthorized firearm possession, as well as breach of probation. Hamilton police have an arrest warrant for him for offences including dangerous driving, failure to stop for police and driving while disqualified. Anyone who encounters him should be called 911.

Additionally, Brantford police are looking to identify a second man in connection with the parking lot incident.

The man, who was seen on surveillance video, is described as being black and likely in his 20s, with “medium-length dark hair that sticks up on his head.” In the video, the man was wearing a dark Nike T-shirt with white lettering and the Nike swoosh on the front, dark jeans and white shoes, and riding a bright yellow mountain bike.

A third person is also sought in connection with the incident. No information about him has been released by police.