Smoke filled the sky over a Brantford rubber factory after a fire broke out Sunday morning.

Police say they were called to the North West Rubber plant at the corner of Henry and Middleton Streets around 6 a.m.

The fire is believe to have started near rubber mats on skids sitting in the storage yard.

"The actual tire plant isn't impacted at this time," says deputy fire chief Todd Binkley. "It's just their yard and outside storage area."

Firefighters are concentrating on preventing the fire from spreading further. 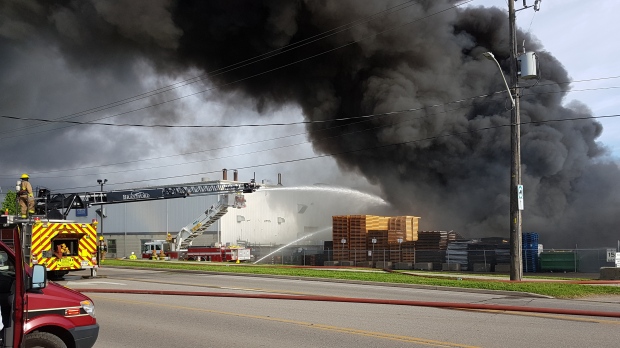 "The biggest challenge is that the product is a rubber matting that's piled on wooden pallets. Both rubber and wood are very combustible materials."

Police say there were no injuries but employees were present at the time of the fire.

Intially there were concerns about toxins in the air due to the burning rubber.

"Just from standing here and going by the street I can feel a little tingling in the back of my throat," says Doug Jarvie.

The Ministry of the Environment was called in to test the air quality.

They say there was contaminant detected in the plume of smoke but it is within safe levels.

In a press release they said: "At the levels currently measured, the MOE does not anticipate health impacts to the public from short-term exposure."

However they will remain on scene to monitor conditions until Monday.

Residents in the area are also advised to avoid the area, keep their windows closed and HVAC systems off as a precaution.

Businesses have also been encouraged to evacuate. 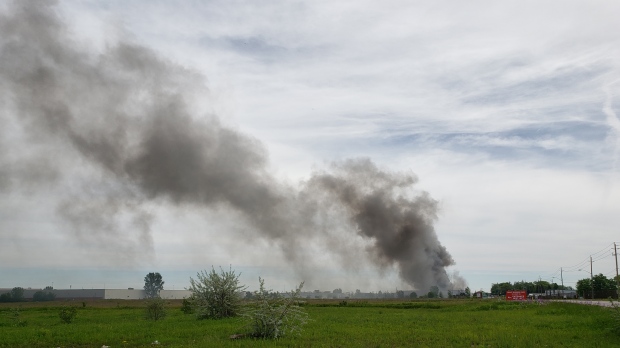 Officials say there is still a large amount of product burning more than 12 hours after the fire first started.

The Ontario Fire Marshall has also been called in to investigate.