Kitchener artist picks up what others throw away

Most people walk past litter on the street without giving it a second thought.

The few who do decide to pick up the trash usually only keep it for as far as the next garbage bin.

But for Susan Coolen, one person’s trash really is another person’s treasure.

Coolen is Kitchener’s artist-in-residence for 2013.

Her first project for the city is called ’50 Ways to Leave Your Litter: In the Beginning’.

But before she can display her artwork at City Hall, she has to track it down on Kitchener’s streets.

“I’m always looking. I’m not looking for anything specific, but I’m noticing everything on the ground,” she explains.

Coolen’s art starts with her walking down the street and picking up discarded items – lighters, pop tabs, plastic lids and other common forms of litter.

Even roadkill captures her attention – it inspires here to create exhibits depicting the ‘crime scene’ where the animal died.

“Just rethink what it is that is actually quite ordinary, often ugly and dirty, and yet it can be transformed into something that goes beyond that,” she says.

Her work as artist-in-residence doesn’t include roadkill, but the rest of her ‘litter-arti’ will be displayed through the year at various city events and locations.

She hopes her work will help raise awareness about unnecessary waste in Kitchener, as do the city officials who hired her.

“Sometimes it really takes someone who's really creative like Susan to change our perspective on these things,” says Emily Robson, Kitchener’s arts and culture co-ordinator.

Though quick to call herself a “starving artist”, Coolen does receive a small honorarium from the city – so although she does it in a different way from recyclers, scrappers, garage sales or Internet buyers and sellers, she too is turning trash into cash.

CTV’s David Imrie is showing you ways to turn trash into cash this week on CTV News. 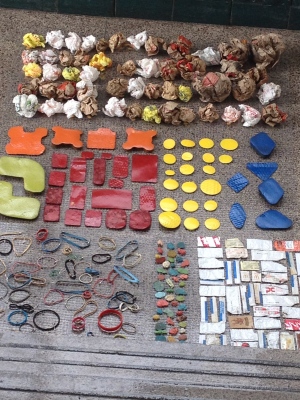