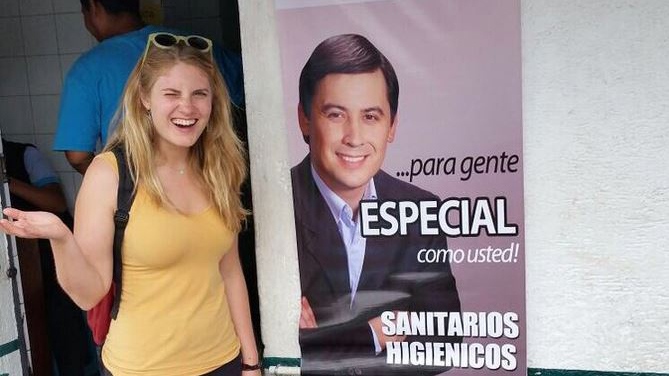 This photo showing MP Michael Chong in a Guatemalan ad was shared on twitter by Bailey Greenspon, on Thursday, March 16, 2017. (@BaileyGreenspon)

If cleanliness is next to godliness, Conservative leadership contender Michael Chong is all-powerful -- at least in Guatemala.

The MP has become the poster boy for spotless public washrooms in the Central American country.

But Chong has some competition for Canada's top international model: Justin Trudeau.

According to emails obtained by the Conservatives through the Access to Information Act, life-sized, cardboard images of the prime minister are being put on display by some Canadian diplomats in the United States to promote Canada.

The emails show a cardboard prime minister was used by the consul general in Atlanta at an event last June.

That prompted staff at the embassy in Washington to make a rush order for a Trudeau cut-out to use in their Canada Day celebrations.

"I think this will be a hoot and extremely popular and go well with our snapchat filter," wrote Anna Gibbs, senior events production manager at the embassy.

While some of her colleagues felt the magnified photo of Trudeau in a black suit, black shirt and silver tie "doesn't seem very prime ministerial," Gibbs gushed: "Looks (oh so) fine to me!"

The cut-out was purchased for $147.79, including $72.80 for next-day delivery, but it's not clear if embassy staff actually put it on display.

However, a photo tweeted earlier this week suggests the cardboard Trudeau put in an appearance at a Canadian music festival in Austin, Texas. The photo shows a man posing with the prime ministerial replica in front of a banner emblazoned with the government of Canada logo.

Having a small stroke. @MichaelChongMP, your stock photo is reassuring public washrooms users in Guatemala pic.twitter.com/AAcFeIz5cC

The poster announces a "special service" for men: sanitary and hygienic bathroom facilities.

The poster was spied by a visiting Canadian, Bailey Greenspon, who tweeted a photo that had Parliament Hill all atwitter.

Chong's campaign spokesman, Chisholm Pothier, used the sudden interest in his candidate to remind people they have until March 28 to take out a membership in the Conservative party to be eligible to vote in the leadership.

"Even Guatemalans think @MichaelChongMP is special. You can too Canada," Pothier tweeted.

The Trudeau cut-out is made in the United States and readily available online. But how Chong's photo wound up on a Guatemalan bathroom wall is a mystery.

"When Michael was first elected he had high res photos in the media section of his website," said Pothier. "Our best guess is that someone in Guatemala found this page and used it for their ad campaign."