Grocery store to open in downtown Kitchener this fall

Space inside the former Goudies building at 8 Queen Street North is being prepared to be turned into a grocery store.

Owners Sarah Pepper and John Kent – downtown residents themselves, who say they’ve long wished for a grocery store in the neighbourhood – say they hope to have J&P Grocery open by this fall.

“We always said ‘I wish there was a grocery store downtown, I wish I could walk and go grab my groceries,’” Pepper said Tuesday.

J&P Grocery was a project 18 months in the making for its creators.

They plan what Kent calls a “one-stop shop” for people who live and work downtown, including produce, meat, household goods and even a café in their 5,000 square feet of space.

“We’re going to have as much local product as we can,” Pepper said. 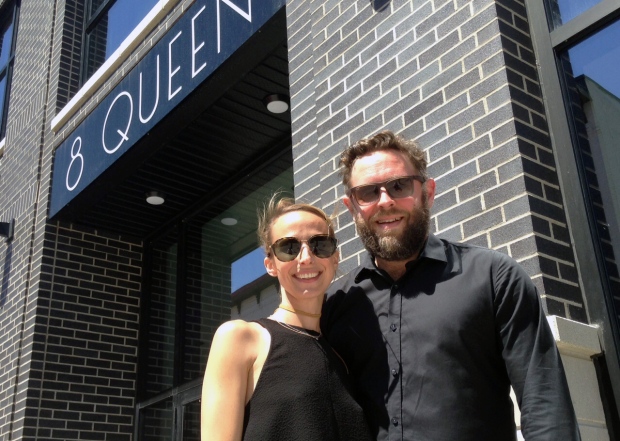 Travis Weagent, who works in the downtown as a lawyer, wasn’t aware of the plans for the supermarket – but reacted with quick glee when he heard about the endeavour.

“No kidding! Where?” he exclaimed.

“I’d love to have a grocery store that I can walk to.”

While the building’s address is on Queen, the main entrance will be off Goudies Lane, with a back door accessible via Ontario Street.

The building’s main entrance, and a good portion of its space, is used by video marketing company Vidyard.

From 1925 until the late 1980s, it was the home of the Goudies department store.

With reporting by Marc Venema