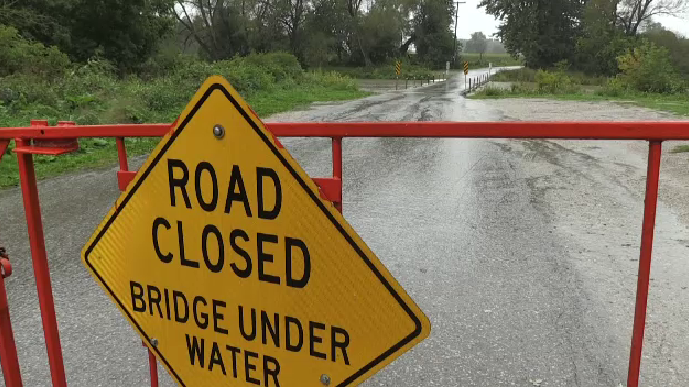 They say between 60 mm and 100 mm of rain fell within a 24-hour period throughout the watershed, causing flows to increase in local waterways.

One of the warnings is for the Conestogo River in Drayton, with flows expected to peak early Thursday morning.

The second warning is for the Nith River in New Hamburg and Ayr. They expect flows to peak in New Hamburg by midday Thursday, and in Ayr, by Friday morning.

The low level bridge in St. Jacobs was also closed Wednesday in reponse to the rainfall.

“The water can get very fast, so it won’t take much to draw someone into the water, or even a vehicle, to push it into the water,” said Dennis Aldous, the Fire Chief for Woolwich Township.

The GRCA says the bridge could stay closed into the weekend or until the Conestogo River recedes.

The agency goes on to say that runoff has also caused flooding in urban areas, including Schneider Creek in Kitchener.

Reservoirs in Belwood, Conestogo, Guelph, Luther, Woolwich, Laurel and Shade’s Mills are being used to store runoff. The GRCA says smaller dams in Wellesley and New Dundee are also being used.

They expects flows to remain high thorough the weekend.