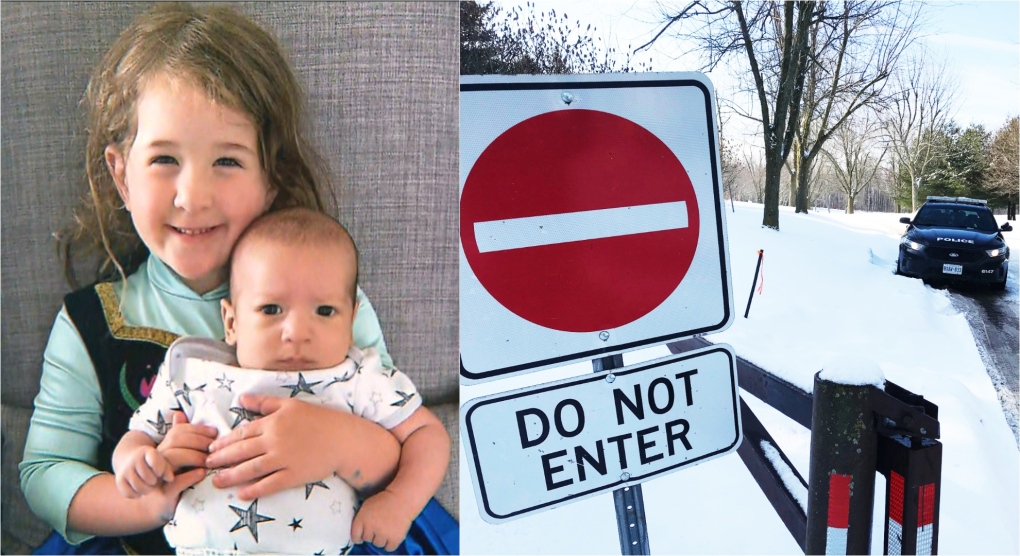 Keira Kagan, 4, is seen in this image with her younger brother. (Supplied by family)

TORONTO -- A grieving mother read to her four-year-old daughter one final time on Thursday, as hundreds of mourners gathered for the funeral of the girl whose body was found at the bottom of a cliff after a weekend hike.

Police found Keira Kagan and her father dead Sunday evening in Rattlesnake Point Conservation Area in Milton, Ont., under circumstances some of the girl's family members describe as suspicious.

At the funeral, Jennifer Kagan read two of Keira's favourite books: "No Matter What" and "The Runaway Bunny."

Kagan and her husband, Philip Viater, believe the deaths were a murder-suicide that took place amid a lengthy custody battle.

Police say the girl and her father, Robin Brown, went missing on Sunday afternoon after they went hiking. Police launched a massive search of the area during a severe winter storm.

Halton regional police have said they are not investigating the deaths as homicides "at this point."

At the funeral, the family focused on Keira's life.

She loved her eight-month-old brother, Joseph, and the two would play together in Keira's bed on many mornings, Kagan said.

The girl loved poetry, rap and unicorns. She loved music -- her favourite songs were "Be Prepared" by Scar from "The Lion King" and two songs from "Frozen 2."

She also loved to dance.

"We would dance well past her bedtime many nights," Viater said.

She loved to run and her favourite part of kindergarten was the "free play time."

Keira also had a sharp wit, her stepfather said.

"I joked with her one time if she doesn't listen, we're going to return her to the baby store," Viater said. "She immediately retorted she'd return me to the adult store!"

Kagan said everything reminds her of her daughter: her empty car seat, her pink coat in the closet and the cup of water by her bedside.

She now wears one half of a heart on her necklace. Keira is wearing the other half.

"When Joseph touches my necklace it gives me comfort, for I imagine playing with you and pulling your hair and you kissing him on the mouth and laughing, two beautiful innocent children just being happy."

She said Keira told her last November that she didn't want to be forgotten.

"Keira, you and mama will be together and love each other forever," Kagan said as she looked at the small casket, "no matter what."

This report by The Canadian Press was first published Feb. 13, 2020.