A Walkerton landmark has been destroyed.

Fire broke out at Rob's Sports Bar and Roadhouse on Scott Street around 12:30 Sunday afternoon.

Witnesses say it started at the back of the bar.

Five departments were called in to help fight the fire but the building was already fully engulfed by the time they arrived at the scene.

OPP say the building is a total loss. It’s expected to be torn down Sunday night or Monday morning.

No one was hurt in the fire.

Scott Street was closed for several hours while crews worked to extinguish hotspots.

South Bruce OPP and the fire marshal’s office are investigating the cause of the fire. 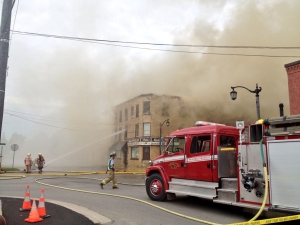 See viewer-submitted photos of the fire