Expect higher hydro bills in 2016, even with debt charge eliminated 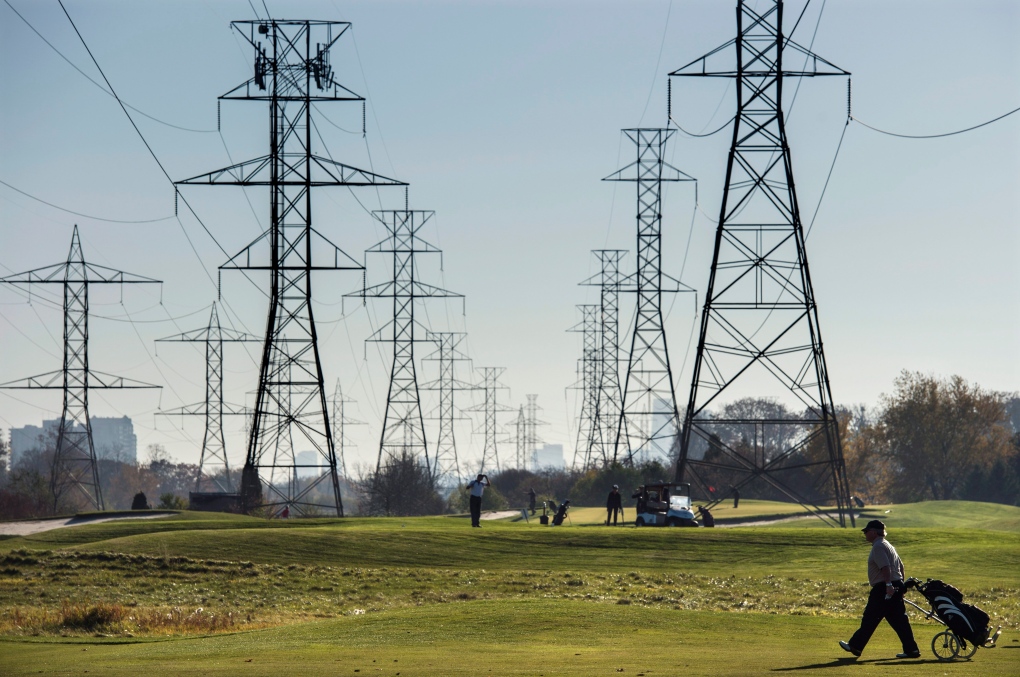 Hydro towers are seen over a golf course in Toronto on Wednesday, November 4, 2015. (Darren Calabrese / THE CANADIAN PRESS)

TORONTO -- Ontario residents can brace for another hike in electricity bills on Jan. 1.

The increase comes on the heels of a jump just two months ago, and hydro bills will rise again after the Liberals introduce a cap-and-trade plan in the spring.

Under the Liberal government, electricity prices in Ontario soared from a flat 4.7 cents a kilowatt hour in 2004, to the Nov. 1, 2015 rate of 17.5 cents a kwh at peak times, increases that total almost 375 per cent.

There are various changes taking effect in the new year that will have an impact on electricity bills.

There are few details known about the Liberal's cap-and-trade plan to fight climate change, but it is expected to push up prices for many consumer goods, including electricity.

"In terms of cap and trade, the cost of doing nothing is huge," Premier Kathleen Wynne said in a year-end interview with The Canadian Press. "We don't have a choice as a globe."

The Liberals have started the process of selling up to 60 per cent of Hydro One, which the opposition parties warn will also drive up electricity rates, but the government says rates will still be set by the Ontario Energy Board.

"There's no doubt about it, that we think the sale is going to have a negative impact on the electricity bill," said Progressive Conservative energy critic John Yakabuski.

"It's difficult to determine how much they'll go up, but we do know that we will no longer be able to have the same influence over Hydro One when it becomes majority privately-owed."

Starting Jan. 1, the debt retirement charge will be eliminated from residential hydro bills -- which will mean savings of about $70 a year for the average household.

But at the same time, the government is also ending the 10 per cent credit on all portions of the electricity bill, including the HST, known as the Clean Energy Benefit, which meant savings of nearly $200 a year for the average consumer.

There is a new program to help low-income families save up to $50 a month on their electricity bills, but so far only about seven per cent of eligible households have applied for the rebates.

Other hydro customers will pay about $1 more each month to fund that plan, which the Conservatives called a "cruel shell game" designed to confuse the public into thinking the government is making hydro affordable for low-income families.

Hydro One is increasing its distribution rates in 2016, expected on Feb. 1, which will mean a 0.4 per cent hike on the average residential hydro bill.

The Ontario Energy Board is also changing to fixed distribution rates, which is expected to result in another 0.7 per cent increase in electricity bills once approved.

The debt retirement charge will still be used to raise $600 million a year from non-residential electricity users, including businesses and industries, until it is scheduled to end in April 2018.

The charge was introduced in 2002 to pay down debt left over from the old Ontario Hydro, which was split into five agencies by the previous Conservative government as it prepared to privatize parts of the electricity sector. The Tories later abandoned those plans.

Ontario Power Generation, Hydro One and municipal utilities were responsible for servicing and retiring part of the debt, while consumers were to pay off the residual stranded debt -- which was $7.8 billion in 1999 -- through the DRC.

But the residual stranded debt was increased to $11.9 billion after the Tories froze electricity rates in May 2002 as part of their aborted effort at privatization, and the newly-elected Liberals did not lift the freeze until March 2004.

Even though Ontario businesses and households paid more than $11.5 billion in debt retirement charges between 2002 and 2014, the residual stranded debt was still at $2.6 billion as of March 2015.

And the original $20.9 billion in stranded debt from Ontario Hydro, the amount not supported by assets, was still listed at $8.3 billion in March.

Financial accountability officer Stephen LeClair said the Liberal plan to sell Hydro One will mean a short term financial gain, but "an ongoing loss in revenue for government, ultimately resulting in an increase in net debt."

Ontario's net debt is projected to hit $298.9 billion in this fiscal year, and costs taxpayers $10.7 billion a year in interest payments.