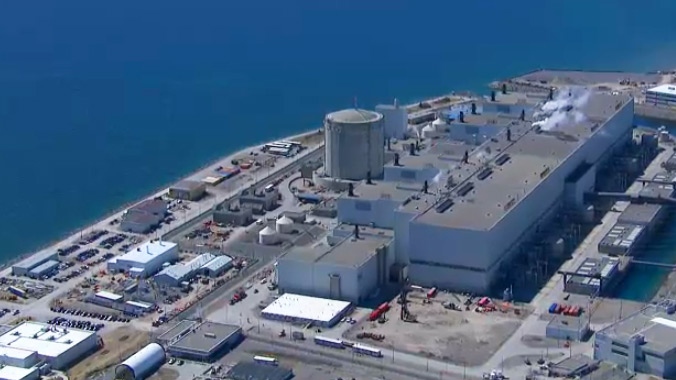 The Darlington nuclear plant is seen from the CTV News chopper on Wednesday, April 15, 2015.

OTTAWA -- Environmental groups are urging the Canadian Nuclear Safety Commission to release a study on nuclear disaster scenarios that they say was suppressed.

The commission released a study last year looking at health and environmental consequences of accident scenarios, following the Fukushima nuclear disaster in Japan, but the groups say it wasn't released in full.

Greenpeace, the Canadian Coalition for Nuclear Responsibility and other environmental organizations say emails obtained through access to information requests show management at the nuclear commission censored the original draft.

They say the original study analyzed the impacts of a Fukushima-scale accident at the Darlington nuclear plant, 70 kilometres east of Toronto, but that wasn't included in the version released to the public.

The groups cite an email from the director of the Darlington regulatory program division that says it would become a "focal point of any licence renewal" and would be used "malevolently" in a public hearing.

The nuclear commission is holding a hearing today in Ottawa on Ontario Power Generation's application to extend the operating life of four aging Darlington reactors and the environmental groups want the Fukushima-scale analysis released before public submissions are due next month.

"The CNSC has betrayed the public trust by concealing a study revealing risks to Toronto," said Shawn-Patrick Stensil, a senior energy analyst with Greenpeace. "The study should be released so these hazards can be addressed transparently and appropriate emergency plans put in place."