Emergency personnel responded to a collision between an LRT vehicle and a car just after 1: 20 p.m. Thursday.

Traffic was backed up down King in both directions.

The crash happened at the intersection of King and Green.

Police say the van was attempting to make a u-turn when the LRT struck it. The train was going about 40 km/h at the time of the crash.

There is significant damage to both vehicles.

The driver of the van was taken to hospital as a precaution to be treated for minor injuries.

This is the third crash involving an LRT vehicle in the last two weeks.

The first one happened at the end of May and involved another driver who was charged with failing to stop at a red light.

The second crash was very minor, considered a non-reportable crash by police. Regional officials estimated the damage in that crash to be less than $2,000.

In Thursday's crash, though, there were emergency vehicles on both sides of the street, which would hinder buses getting to the scene.

The crash is still under investigation. 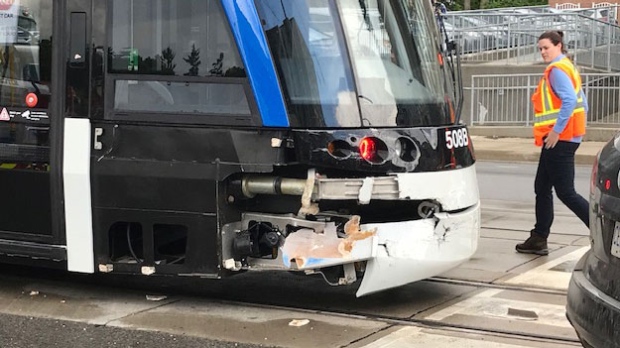