KITCHENER -- Home prices in Waterloo Region jumped to the highest they've been in more than a decade after a busy month of sales.

The Kitchener-Waterloo Association of Realtors (KWAR) reported that the average price of a detached home rose to $745,149 in July, up 21.4 per cent compared to the same month the year before.

Taking into account all types of residential properties, the average home sold for $639,814 last month, also up more than a fifth.

The average sale prices are broken down as follows: 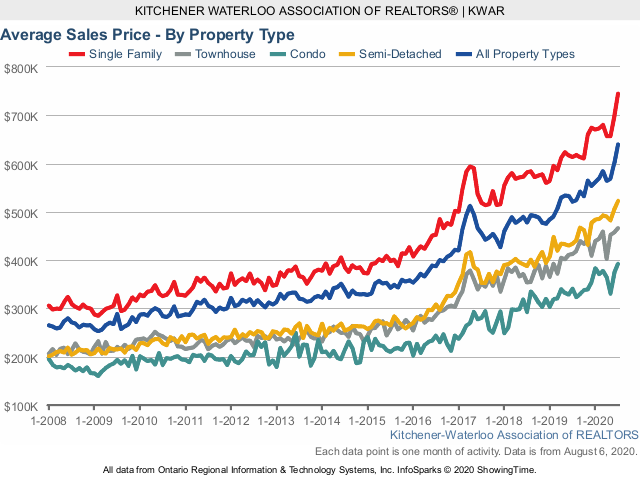 The average sale price of residential properties since the beginning of 2008. This graph shows that prices hit their highest since in July 2020. (Source: KWAR)

Those averages account for the 734 residential homes sold through the Multiple Listing System in July, which was 25.7 per cent more than the same month last year.

“Competition was high for buyers looking to lock down a house in July,” said Colleen Koehler, President of KWAR, in a news release.

“The rate of home sales in July resembled the kind of month we would normally see in May, and I chalk up much of that to the pent up demand that built as we moved into Stage 3 of reopening in mid-July.”

According to a news release from KWAR, there were 888 new listings to the MLS system through July, while the total number of homes for sale by the end of the month dropped to 592.

That's a drop of almost a third compared to the same month last year.

“Homebuyers remain very confident about owning a home in Waterloo Region, and with mortgage rates still at near-record-low levels I expect we will continue to see strong home buyer demand going into the fall."

It took the average home just 17 days to sell last month, down five days from the average sell time in July 2019.