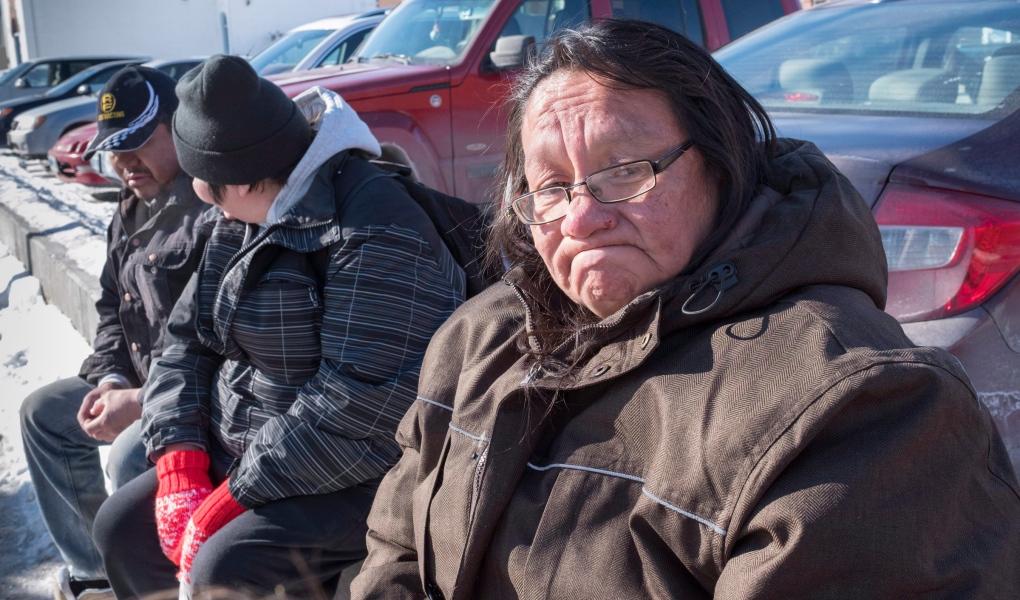 Bessie Strang pauses as she tells her story while sitting with other homeless friends, Friday, March 4, 2016 in Thunder Bay, Ont. (THE CANADIAN PRESS / Paul Chiasson)

THUNDER BAY, Ont. -- Two of Bessie Strang's friends sit on a concrete barrier in a Thunder Bay parking lot, the three of them sharing a bottle of yellow Listerine.

The first detailed profile of homeless people across the country shows that stories like Strang's are common on Canadian streets: Addiction, physical health, mental health and family strife push people into poverty and homelessness -- and, in many cases, are what keeps them there.

Thunder Bay is ground zero, a place where all the elements of homelessness come together in a frightening storm that led to 17 deaths on the street last year alone.

New numbers, part of a federally organized "point-in-time" census of homeless people, show the problem is at its worst in Thunder Bay, and that addiction is the No. 1 cause, followed by mental health issues and family strife.

Addiction pops up in other cities, including three in New Brunswick: In Saint John, 15 per cent of those surveyed in the federally organized point-in-time count said addiction was the reason they were homeless, sitting third behind family conflict or domestic abuse (32 per cent) and having spent time in jail (17 per cent).

In other words, the broken beer bottles along Thunder Bay's waterfront park are more a sign of the norm in Canadian cities, rather than the exception.

And when they can't get -- or can't afford -- alcohol, they turn to alternatives.

"I'm not going to lie to you. I drank mouthwash, hand sanitizer, hair spray, sometimes straight out of the bottle, too," says Clayton Mawakeesick, who is now part of what's known as a harm-reduction program in Thunder Bay.

Instead of drinking non-beverage alcohol -- or "babash juice," as it's known in Ojibway slang in Thunder Bay -- Mawakeesick consumes six ounces of wine every 90 minutes as part of the program in order to manage his addiction and keep him healthier than he was before.

The success of the program over the past four years, and similar programs in places like Ottawa, have led local officials to look into opening a supervised injection site similar to Insite in Vancouver that could replace the bags of clean syringes, filters, alcohol swabs, and cookers -- used for smoking crack cocaine -- the city's largest shelter hands out regularly.

The preferred drug of the moment is a cycle not unlike a ferris wheel: one rises to the top, and then another takes its place, says Dr. Stephen Hwang, one of the country's top researchers on homeless health from St. Michael's Hospital in Toronto.

Fentanyl is on everyone's minds, the cause of a high number of deaths with lawmakers scrambling to get it under control. Before that it was Oxycontin, a prescription painkiller that led to break-ins at pharmacies.

Other common street drugs in use include morphine, its synthetic equivalent, Dilaudid, and other prescription painkillers.

North America is one of the biggest prescribers of painkillers, with Ontario one of the highest on the continent and Thunder Bay highest in Ontario, says Dr. Ella Goodman from the city's NorWest Community Health Centre.

"Unfortunately, there's always some diversion of medications as well too, meaning that the people that are supposed to be taking the medications in the way it's prescribed -- it's not happening."

Research into the homeless population has shown they frequent emergency rooms for help, have worse health outcomes than the general population and can have multiple health issues at one time like the 54 per cent of homeless people in Vancouver who reported so last year.

In Toronto, a street survey from 2013 found "homeless people are frequent users of health and treatment services," including emergency room visits. In Hamilton, the point-in-time count showed 38 per cent of homeless people reported a chronic health condition, double the number in the overall Canadian population.

While the health problems may seem self-evident, the new research shows that they are also intractable.

Hwang says there hasn't been a dramatic change in the health of the homeless population over the past five to 10 years even though they have more access to health care.

In some cases, people like Strang avoid hospitals and doctors entirely. Strang, who says she was diagnosed with stomach cancer, says she'll go to the hospital when she wants to.

There's an additional layer to Strang's case that is common across the country: she is aboriginal, a group various studies say makes up one-third or more of that national homeless population. In Thunder Bay it is it 73 per cent, according to the most recent homeless survey, the first of its kind in the city's history.

They may carry with them the trauma of residential school experiences, or carry "inter-generational trauma" by virtue of being the children of survivors, becoming cut off from services and ending up homeless, says Brad King, the operations manager at Thunder Bay's largest shelter, known as Shelter House.

Strang says she went to the Poplar Hill residential school in northern Ontario. She stops at the recounting of a memory and breathes heavily. She removes her glasses and wipes tears from her eyes. She says she thinks some days about hanging herself or overdosing.

Those who leave their reserves to be closer to schools, hospitals and potential jobs head to cities like Thunder Bay, Winnipeg, Edmonton and Vancouver, hoping for a better life. Once in the city, they are cut off from the supports they have back home. A 2014 review of research into aboriginal homelessness in Canada found some homeless aboriginals use reserves as an economic safety net, returning when they run into financial hardships in the city.

And some see no reason to leave the city, even if they are living on the street.

Some people go back home, then end up back in Thunder Bay and get "stuck again" and wind up back at the shelter, says Hazel Cripps, an Ojibway from Eagle Lake First Nation in Ontario.

"I would never move back to my reserve," Cripps says. "There's nothing there for me."