The two people charged in connection to the death of Lucas Shortreed made their first appearances in court Thursday.

Shortreed, 18, was killed in 2008 after being hit by a vehicle near the community of Alma, Ont.

The driver did not remain at the scene. In the decade and a half since, police have been searching for those responsible.

On Wednesday, Wellington County OPP conducted a search warrant at home off of Highway 6 and Side Road 21 – around 5 km away from the where Shortreed was killed 14 years before.

Two people were taken into custody and charged. Police said a vehicle was also recovered from the property. 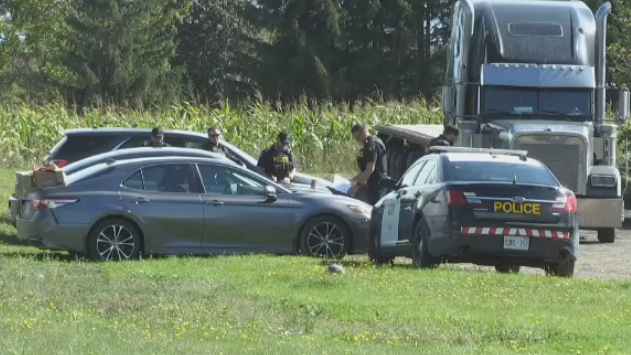 Police search a Mapletown Township address on Sept. 21, 2021 as part of the investigation into Lucas Shortreed's death. (CTV Kitchener)

David Halliburton, 55, of Arthur was charged with failing to stop at the scene of an accident involving bodily harm and obstructing justice.

Anastasia Halliburton, 53, also from Arthur, was charged with accessory after the fact and obstructing justice.

Shortreed’s friend, Cole Giles, said it was an emotional day.

“[Lucas] was a smart guy. He was going to do good things with his life, for sure. He’d bring a smile to your face anywhere and in any situation. We miss him a lot,” Giles said.

“It’s been so long, I don’t know how to feel, to be honest. I just hope this brings some peace to [Lucas’ family], because they deserve it.”

A bail hearing for the two accused is scheduled for Friday.

An initial media release from police said the accused were from “Arthur Township.” OPP have since said they are, in fact, from the community of Arthur. This article has been updated.