Woman charged after van crashes into hydro pole in Kitchener, knocks out power 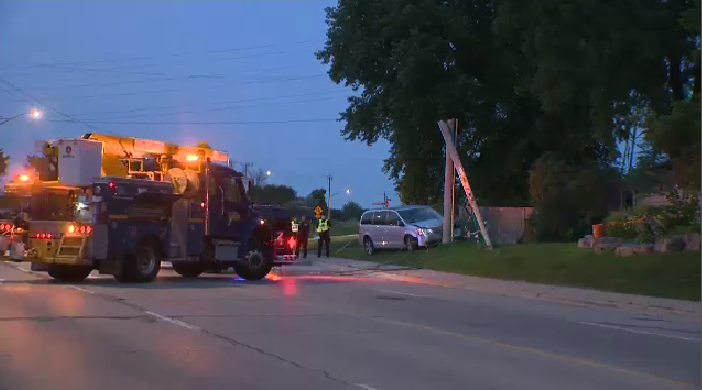 Crews work on the scene of a van that crashed into a hydro pole in Kitchener. (CTV Kitchener) (July 29, 2021)
KITCHENER -

A woman has been charged by regional police following a van crashing into a hydro pole and knocking out power to several homes in Kitchener.

The incident happened Wednesday night around 8:30 p.m. on Fairway Road near River Road.

Police say the driver of the van lost control, mounted a curb, and hit the hydro pole.

Both the driver and the infant passenger were taken to hospital with minor injuries.

A 34-year-old woman has been charged with careless driving and driving without a licence.

Fairway Road was closed for about eight hours as hydro crews worked to restore power to the area.

A rescue operation is underway Monday for 39 people stuck underground at Vale's Totten Mine in Sudbury, Ont., CTV News has confirmed.

R. Kelly, the R&B superstar known for his anthem 'I Believe I Can Fly,' was convicted Monday in a sex trafficking trial after decades of avoiding criminal responsibility for numerous allegations of misconduct with young women and children.

First-time MPs get first taste of their new jobs

Newly-elected MPs caught a first glimpse of what their new roles in Ottawa will entail, participating in the initial phase of the House of Commons orientation program on Monday.

Homicides in the U.S. in 2020 increased nearly 30% over the previous year, the largest one-year jump since the FBI began keeping records, according to figures released Monday by the agency.