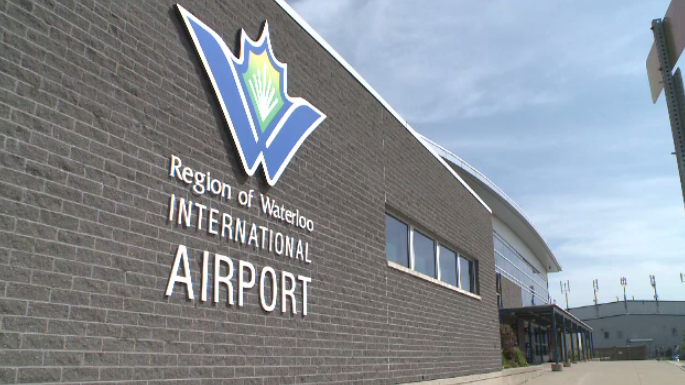 The exterior of the Region of Waterloo International Airport in Breslau.

The Region of Waterloo is crediting Flair Airlines with a "record-breaking" increase in local passenger traffic.

Regional officials said 171,828 people travelled through the Region of Waterloo International Airport in 2021, representing a 245 per cent boost over the previous year.

The region added that was a direct result of Flair Airlines.

The airport also pointed to the success of its flight training school.

“YKF is the busiest general aviation airport in Ontario. Flight training has always accounted for over half of our aircraft movements,” said Chris Wood, the airport's general manager, in a media release. “We are the proud home of the Waterloo Wellington Flight Centre, one of Canada’s largest professional flight training schools. General aviation built this airport and will continue to thrive as we grow.”

A planned expansion at the airport is currently underway and is expected to be complete in 2023.

According to Statistics Canada, The Region of Waterloo International Airport was also ranked as the sixth busiest Canadian airport with 133,293 aircraft movements in 2021. The region said that was a result of the pandemic which grounded most commercial flights. The airport has previously been ranked the 15th or 16th busiest airport in Canada.

A fire ripped through a packed Coptic Orthodox church during morning services in Egypt's capital on Sunday, quickly filling it with thick black smoke and killing 41 worshippers, including at least 10 children. Fourteen people were injured.

'Fanaticism is a danger to free expression everywhere': Ignatieff on Rushdie attack

After Indian-born British novelist Salman Rushdie was attacked during a writing conference in western New York on Friday, current and former Canadian politicians are weighing in on what such attacks mean for freedom of expression and thought.

Salman Rushdie 'on the road to recovery,' agent says

Salman Rushdie is 'on the road to recovery,' his agent confirmed Sunday, two days after the author of 'The Satanic Verses' suffered serious injuries in a stabbing at a lecture in upstate New York.