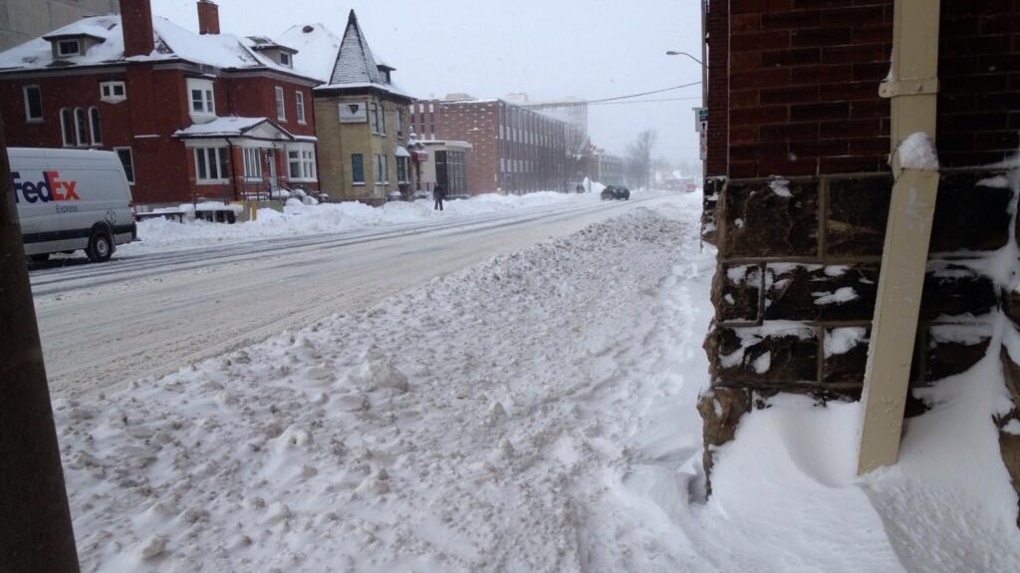 If you live in Kitchener, you have 24 hours from when snow stops falling to clear it from your sidewalk.

That means that in cases where periodic flurries hit the city on a daily basis – as happens sometimes – it can be several days before homeowners have any legal obligation to shovel their sidewalk.

According to a new report, that situation is leaving the city with a significant number of sidewalks which are difficult or impossible to use during winter months for people with mobility challenges.

The report was put together by TriTAG, an advocacy group focused on transportation issues.

TriTAG volunteers tracked sidewalk snow coverage on 11 residential streets in Kitchener, looking for stretches where snow was cleared improperly or not at all.

They found that even several days after snow stopped falling, many sidewalks remained impassable for people with mobility challenges.

As a result, the group says, anyone walking on sidewalks in Kitchener for 50 metres during winter is more than 50 per cent likely to encounter ice or snow obstructions – even if it has been three days since any snow has fallen.

At 160 metres – the average walking distance for a Grand River Transit user to get to their desired stop – that increases to more than 80 per cent.

“Our present system of resident-led sidewalk clearing is failing to ensure safe and reasonable access to our streets and transit network during the winter,” the report reads.

The group wants to see the city start tracking sidewalk clearing more thoroughly than via the current complaint system and introduce a pilot program to test out other methods of enforcement and plowing.