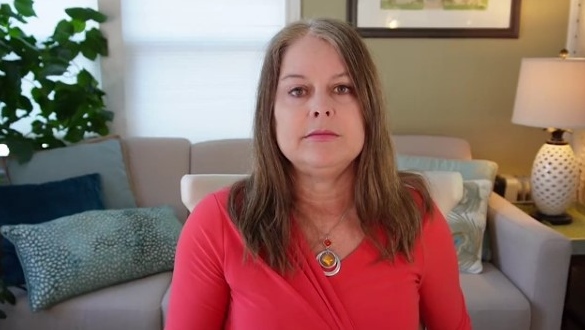 Carolyn Burjoski as seen a video posted to Twitter on Jan. 21, 2022.
KITCHENER -

A teacher with the Waterloo Region District School Board, who was removed from a virtual board meeting this week after making comments the chair called "transphobic," said the experience left her feeling "bullied, slandered and abused."

On Monday night, Carolyn Burjoski expressed concerns that some of the resources in elementary school libraries were inappropriate for young children.

She began reading from a book by Alex Gina titled "Rick." In the second chapter, the character named Rick questions their sexuality and eventually identifies as asexual.

"While reading this book I was thinking: 'Maybe Rick doesn't have sexual feelings yet because he is a child,'" she explained in the meeting. "It concerns me that it leaves young boys wondering if there is something wrong with them if they aren't thinking about naked girls all the time. What message does this send to girls in Grade 3 or 4? They are children. Let them grow up in their own time and stop pressuring them to be sexual so soon."

Burjoski added that "some of the books make it seem simple, even cool, to take puberty blockers and opposite sex hormones."

Burjoski also brought up another book, titled "The Other Boy" by MG Hennessy, which tells the story of teen named Shane who was born female but now identifies as male. She called the book misleading stating that "it does not take into account how Shane may feel later in life about being infertile. This book makes very serious interventions seem like an easy cure for emotional and social distress."

Board chair Scott Piatkowski interjected twice during the presentation citing concerns about the Human Rights Code and then ended her presentation.

Burjoski posted a video to Twitter Friday where she addressed the situation.

"I feel bullied, slandered and abused," she said in part. "The school board has removed the video of the meeting from their YouTube channel so people are not able to hear what I actually said. Most of the short video is me reading excerpts from two books available to any young child who is able to read. My few comments expressed concerns about age inappropriate sexual content. I did not and do not question the rights of trans persons to exist in any way. I fully support the human rights of transgender people."

"The recording of the livestream was not officially posted due to concerns over a Human Rights Code violation," said Eusis Dougan-MacKenzie, the interim chief communications officer for the WRDSB, in a statement. "We are also sensitive to the many students, staff and members of the wider community who were impacted by comments made during the meeting."

Several school board trustees felt Burjoski should be allowed to finish her statement at the meeting, but that was ultimately defeated by a vote of 5-4.

"I stand by it," Piatkowski told CTV News on Tuesday. "It's extremely important that we uphold the Human Rights Code. There were comments that were frankly transphobic."

In Burjoski's Twitter video, she said further action was taken by the school board the day after the meeting.

"The following morning H.R. informed me that I was immediately assigned to home, pending a formal investigation and banned from contacted my colleagues and students. This was particularly upsetting to me because I love my students, and I have not seen them since December."

Burjoski stated that she feels "silenced and punished." Meanwhile, she said, "board members have taken to radio, television and social media to grossly misrepresent my remarks."

Burjoski ended the video by thanking those who reached out to her and said she no longer feels alone in her concerns.

-- With reporting by Heather Senoran

My response to the events that transpired this week regarding my presentation to the school board. You can read more about the story here:https://t.co/VdLwhejXGZ#WRDSB #wrdsbmtg pic.twitter.com/Y5cX3684zX

What is going on with Bill C-11, the government's online streaming legislation?

The Liberals have spent years trying to pass online streaming legislation and now the current iteration, known as Bill C-11, is closer than ever to passing. With a potential parliamentary showdown ahead, here's what you need to know about how the contentious Broadcasting Act bill got to this stage.

Though you won't be able to sit on the old, cracked pleather benches and take in the thick smell of gravy and fries, while the gentle sound of clanging dishes provides the soundtrack for your lunch, Zellers plans to roll out food trucks for those 'craving a taste of nostalgia.'

WHO emergency declaration call based on virus spread and variants, Dr. Bogoch explains

The World Health Organization (WHO) is set to decide Friday, whether the COVID-19 pandemic still qualifies for an international emergency declaration title— a decision that will involve factoring in how the virus and its variants are impacting countries around the world, says an infectious disease expert.

Pamela Anderson is addressing discussion about a story regarding her 'Home Improvement' co-star Tim Allen that is part of her new memoir, 'Love Pamela.'

What should Canada be doing about climate change? 25 recommendations

The national Net-Zero Advisory Body released 25 recommendations Friday for how Canada can adjust its climate plan to reach net-zero emissions by 2050 — a goal that the country is not on track to reach right now, according to the report.

The federal government posted a budgetary deficit of $3.6 billion in the first eight months of the fiscal year.

What looks like a giant teddy bear’s face peering into space from the surface of Mars is actually a satellite image of some craters and a circular fracture, scientists say.

Some U.S. auto insurers are refusing to cover some Hyundai and Kia models

Progressive and State Farm, two of America's largest auto insurers, are refusing to write policies in certain cities for some older Hyundai and Kia models that have been deemed too easy to steal, according to one of the insurance companies and media reports.

'It Ends With Us' movie casts Blake Lively and Justin Baldoni

BookTok is all abuzz with the news that Blake Lively and Justin Baldoni will be starring in a movie based on the bestselling romance novel, "It Ends With Us."