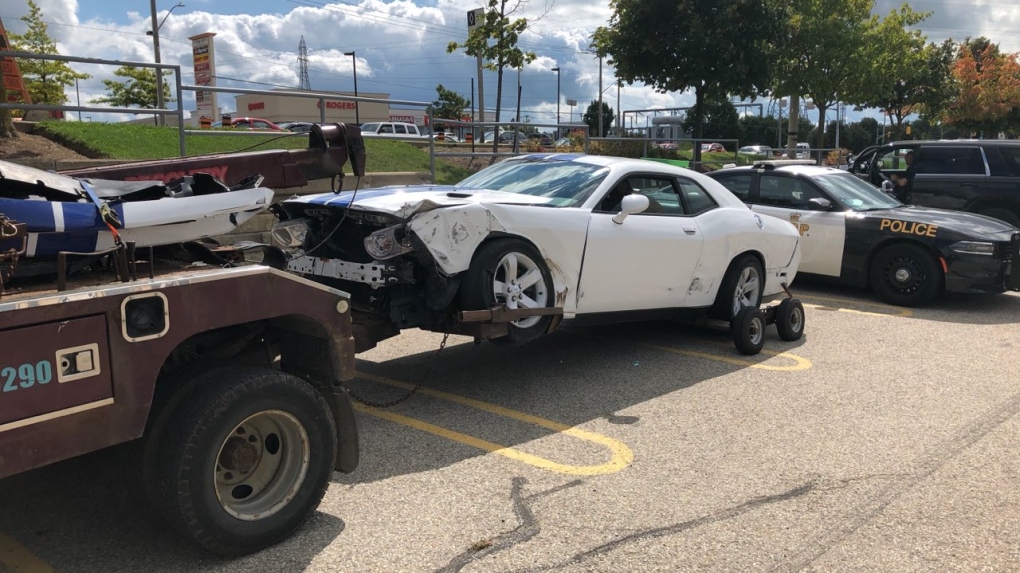 A vehicle that reportedly crashed into a transport truck on Hwy. 7/8 in Kitchener after street racing. (Twitter: Sgt. Kerry Schmidt OPP) (Sept. 7, 2019)

Police are looking for witnesses or dashcam video of a Hwy. 7/8 street race that led to a collision with a transport truck.

OPP Sgt. Kerry Schmidt tweeted on Saturday that two vehicles were racing along the highway in Kitchener around noon.

Police say a Dodge Challenger lost control and collided with a transport before hitting the centre median.

A second vehicle described as a black car fled the area.

In pictures posted by Schmidt, the Challenger could be seen on a tow truck in the parking lot of Kitchener’s Sunrise Centre.

No word yet on injuries or charges.

Cambridge OPP appealing for witnesses/dashcam video after two vehicles were racing along Hwy 7/8 in Kitchener today at 12pm. Dodge Challenger lost control and collided with a transport, then the centre median. The 2nd vehicle, a black car, fled the area. Call OPP 519-654-0150 ^lb pic.twitter.com/eufczIjUMa