UPDATE: On Wednesday June 8, police announced 21-year-old Caleb Kuepfer of Waterloo had been arrested and charged in connection to this shooting.

Waterloo regional police are still searching for a suspect a Sunday morning shooting on Gildner Street in Kitchener.

In a news release, police said officers responded to the area of Park Street and Glasgow Street for reports of gunshots around 9:30 a.m.

They believe the shooting was a targeted incident.

"We do believe the suspect had an altercation with a potential person and as a result of that a firearm was discharged," Const. André Johnson told CTV News.

Police were not able to confirm how many shots were fired, but said no injuries were reported.

They’re also looking for a vehicle that may have been involved.

People who live on Gildner Street said this shooting incident has left them feeling uneasy.

Kelly Shea thought the sound of gunfire was just fireworks.

"It was so much more loud," he said. "Then police were here in no time, so then we realized it was bullets."

Shea told CTV News that the gunshots hit the side of his home.

"It could have come into my window, in the living room, where I was sitting," he said. "So it's very unnerving." 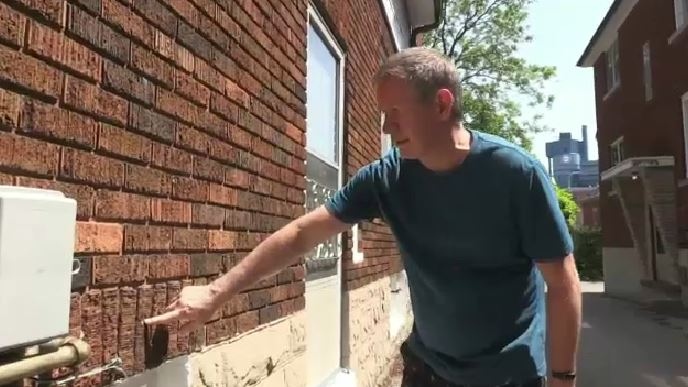 Kelly Shea points out where gunshots hit his home on Gildner Street in Kitchener. (May 30, 2022)

Another Gildner Street resident, who did not want to be named, felt the same as Shea.

“It’s shocking to hear about gunfire on the street,” he said on Sunday, adding he’d lived in the neighbourhood for 13 years. “We haven’t heard anything like that before.”

"He had a full camouflage mask on and all you saw was two little eyes. I went to take my phone so I could get his license and he got in his car and he took off down here and went through that stop sign and kept on going."

There have been seven shootings this year in the Region of Waterloo.

Police said the total for 2022 is already higher than the same time last year, when only five were reported by May 22.

"It's disappointing to be honest with you," said Kitchener resident David Tran.

"I just had a hard time sleeping with that happening," said Shea. "I just hope they catch the person soon." 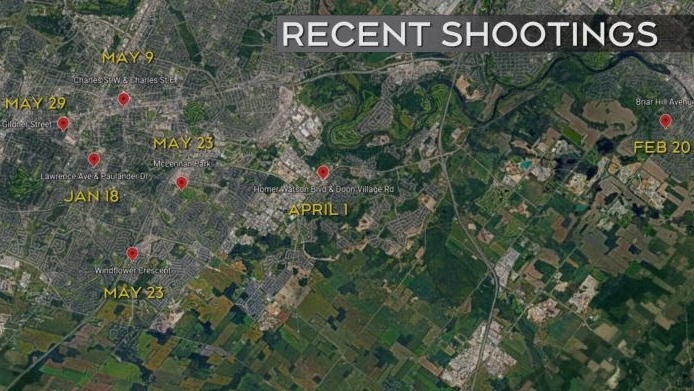